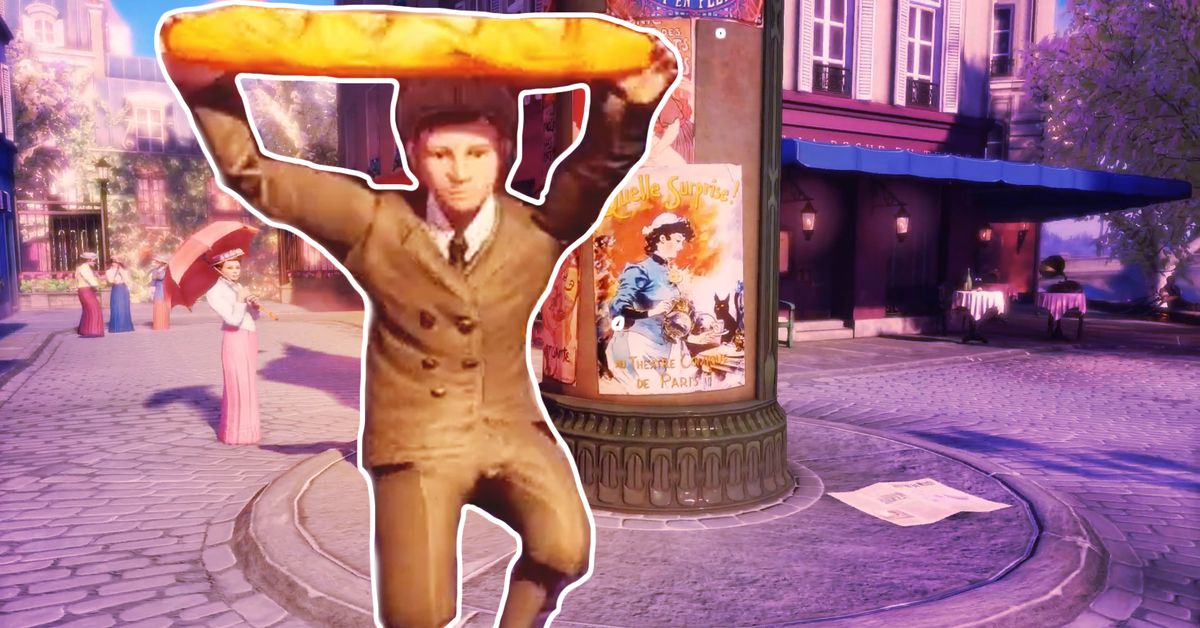 BioShock Infinite has a stand-out, iconic NPC: the Bread Boy.

The Bread Boy appears in BioShock Infinite’s Burial at Sea DLC episodes, in an over-the-top Parisian dream sequence. He was the subject of a recent viral tweet that poked a bit of fun at what the tweeter saw as a hamfisted way to tell players, hey! You’re in Paris!

But the reasons the Bread Boy exists, why he dances, why he holds the baguette — tell a broader story about how games are made, and the very specific, very strange challenges that developers face.

That’s why I reached out to Gwen Frey, founder of indie studio Chump Squad and maker of the Bread Boy, to get the inside story.

Frey is currently hard at work on a puzzle game called Lab Rat for Chump Squad. But back in 2011 she was at Irrational Games, working as an animator on BioShock Infinite and its downloadable content.

The Bread Boy scene of Burial at Sea takes place in a fantasy Paris, where everything is a just a little too perfect. Of course, once this dream vanishes the player will be back in Rapture, the underwater city where most of Burial at Sea takes place. One of Frey’s many tasks was placing background characters in this scene: the painters capturing the Seine, the woman chatting on the street, and the couples enjoying aperitifs, for example.

“I thought it looked really good. But I thought it was pretty static,” Frey said. “I talked to some level builders, and they agreed, like there just wasn’t enough motion in the scene.”

But giving the scene motion wasn’t as easy as picking an NPC and blessing it with the powers of ambulation. These NPCs … were chumps.

“A chump is just […] like a skeletal mesh that just plays a looping animation,” said Frey. Chump is the nickname that developers at Irrational Games gave this particular kind of NPC, but they appear in functionally any game of this sort. They’re characters that have no virtual brain or pathfinding, in contrast to AI characters that have specific programmed behaviors.

The chumps in this scene of Burial at Sea have head and eye-tracking scripts that Frey created. This allows the NPCs to react to Elizabeth’s presence (so that they can say “Bonjour!”). But that’s about it.

Chumps were developed early in Frey’s tenure at Irrational Games.

“Basically, as soon as I got there, we discovered that we could have far fewer AI on screen than we believed, when we looked at the specs for the consoles,” Frey said. Because of the computational weight of the AI characters, the team could only have seven on-screen at a time — eight if you count Elizabeth, who in BioShock Infinite is an NPC, and the player’s constant companion.

But it’s a lonely city on the sky that only has seven characters visible at a time. So Frey worked on a system to implement chumps: NPCs that were animated, but mostly stationary. They can be made to move, but their movements are scripted rather than AI-driven. The game could support plenty of chumps on-screen at one time, because they’re so computationally light.

And it would be a chump that solved the movement problems in the Paris scene. Check out the video for the in-depth description of how Frey whipped up the Bread Boy, and unwittingly launched a meme.

People seem to enjoy looking at the Bread Boy — even if he’s making them laugh. Now, Frey is hard at work on a game that’s intentionally funny: Lab Rat, a satirical puzzle game due this year from her studio, Chump Squad.

Lab Rat was born from Frey’s early-pandemic feelings of absurdity at being trapped indoors, doing silly little tasks on a computer.

“I felt like this rat in a cage, just performing tasks,” Frey said. “I was looking at the way technology was treating us and it felt — I don’t want to say evil.” An evil AI, like GLaDOS for example, would be actively cruel to humanity. What Frey felt was something more removed and uncaring.

At the same time, Gwen felt it had been a long time since there had been “a really funny, good puzzle game.” The result is Lab Rat, which is due out later this year.

“The biggest thing for me is just always, games have the capacity to reach people,” Frey said. “And if I could make somebody laugh with this, you know … that’s it. That’s the best feeling.”

The Bread Boy is pretty silly, but he’s a reminder that every part of a game has a developer’s fingerprint on it, and the weirdest details can point to an interesting story. This iconic, indelible meme boy exists because of a combination of technical limitations, the need to create a more dynamic scene, and a creative solution to the problem.

All done in about the time it takes to cook a baguette!