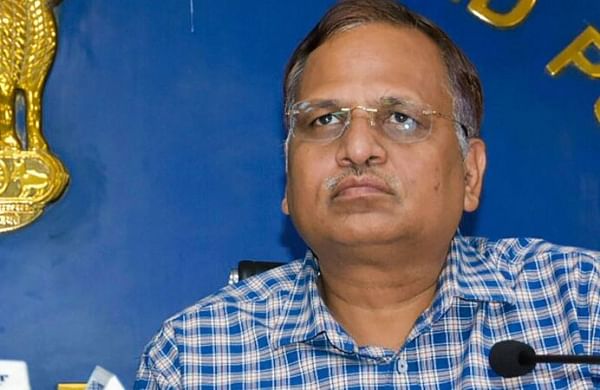 NEW DELHI: The Delhi BJP on Thursday stepped up its demand for “dismissal” of AAP minister Satyendar Jain and said if he is not removed from the post by the next day a massive protest will be held against Chief Minister Arvind Kejriwal.

The Enforcement Directorate had on Tuesday said it has attached properties worth Rs 4.81 crore of the family and companies “beneficially owned and controlled” by Jain in connection with a money-laundering probe.

He is the minister for health, power, home, PWD, industries, urban development, flood, irrigation and water in the Arvind Kejriwal-led government.

Delhi BJP president Adesh Gupta along with Leader of Opposition in the Assembly Ramvir Singh Bidhuri said in a press conference, “If Satyendra Jain is not dismissed in next 24 hours, the party will hold massive protest against the chief minister.”

Gupta accused Kejriwal of “protecting” Jain “The ED investigations against Jain since 2017 has revealed there is a clear evidence of illegal transactions of crores of rupees,” he alleged.

The AAP has claimed that the case against Jain will be dismissed by court as he is a “very honest man”.

The ruling party in Delhi has also accused the Union government of using its investigation agency against Jain, claiming the BJP is “scared by the rise of the AAP” after its stupendous victory in Punjab.

Jain is the minister for health, power, home, industries, urban development, flood, irrigation and water in the Arvind Kejriwal-led government.

The ED had in 2018 questioned the AAP MLA from Shakur Basti in connection with the case.

Kejriwal in February, before Punjab polls, had claimed that it was learnt by him from sources that ED was going to arrest Jain and accused the Centre of targeting the Aam Aadmi Party after realising the BJP “would lose” the elections.