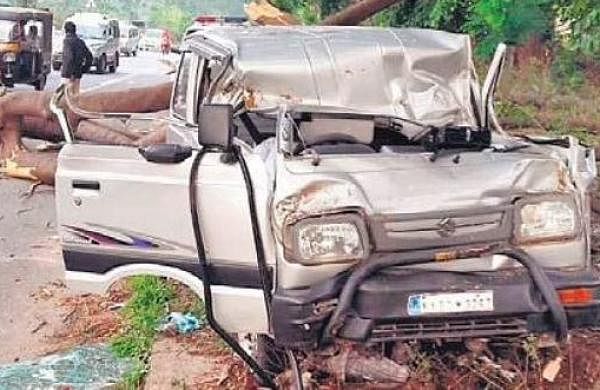 BENGALURU: The death of two travellers, including a two-year-old child, on the Bengaluru-Mysuru highway on Monday morning, after a heavy tree branch fell on their moving car, is a warning that should not be ignored. Karnataka forest department officials have warned of more such incidents as roadside trees are becoming vulnerable due to ongoing civil works on roads in the city and its outskirts.

Officials said trees are becoming vulnerable because of unplanned and unscientific civic works by engineers of various government agencies, like Karnataka Road Development Karnataka Road Development Corporation, National Highway Authority of India, Bruhat Bengaluru Mahanagara Palike, energy department, Bangalore Water Supply & Sewerage Board, Bangalore Electricity Supply Company (Bescom) and other agencies. The caution comes even as the forest department is undertaking a survey of the total number of trees in Bengaluru and their health condition.

Trees prone to fall as roots are being cut

“The manner in which roots of roadside trees are being cut for road widening, tarring, concreting and even for making space for laying utility cables and underground water lines is damaging trees. In some cases, roots are cut by half and the area around the standing tree is concretised which make trees prone to fall during strong winds and heavy downpour,” said a senior forest official. The falling of branches, quick drying up, delayed greening and flowering are not just signs of climate change, but also of gradual death, ignored by urban planners. In the wake of the upcoming monsoon, citizens, especially those who are travelling, must exercise caution, the official added.

The forest department has placed its observations before the High Court-constituted Tree Committee, state government, Chief Minister and Karnataka High Court. The roads near TV Tower, including Jayamahal Road, is a classic example of how trees can be made a part of city infrastructure. Accepting the advice of the forest department, in the 1990s, roads were redesigned along the tree canopy. This is maintained even now, and can be replicated in other places also, point out experts. Noted environmentalist A N Yellappa Reddy pointed to a lack of open space around trees. Shrinking ground space and packing concrete around roots can lead to weakening of trees, he added.