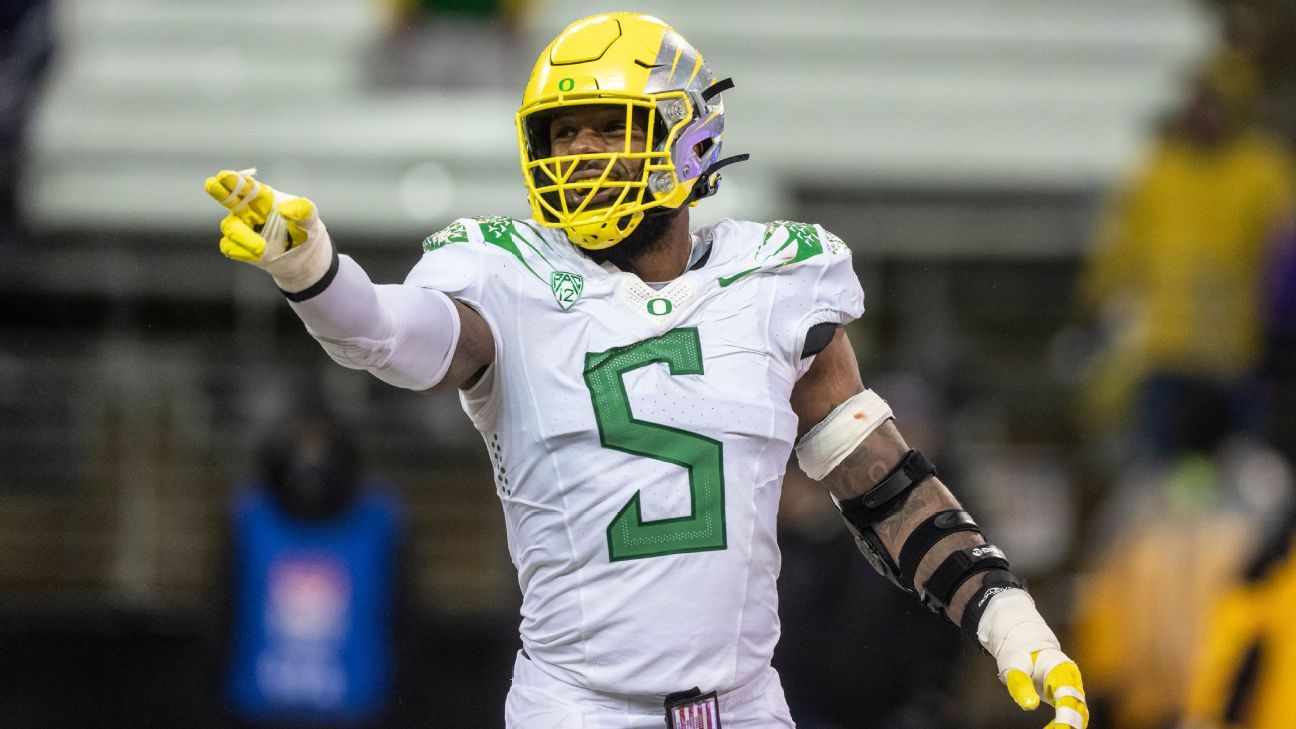 FLORHAM PARK, N.J. — The New York Jets haven’t used a first-round draft pick on an edge rusher since Vernon Gholston in 2008, and now they could be in position to draft the player who, only a few months ago, was the presumptive No. 1 overall pick.

A player who became a college star the moment he stepped on campus as a freshman.

A defensive end who plays fast and talks fast, qualities that should endear him to New York.

Are the football gods about to reward the Jets with Kayvon Thibodeaux? If so, will they take him? It’s the most compelling question surrounding the team as it prepares for the April 28 NFL draft (on ESPN, ABC and ESPN App).

The former Oregon star is one of the most polarizing prospects. With a strong personality and a motor that runs hot and cold, he could fall out of the top five, which seemed unfathomable during the season. Is he being victimized by pre-draft overanalysis or are the concerns legit?

With the fourth and 10th picks, the Jets may have to make that call. It’s a massive decision for general manager Joe Douglas, who will be excoriated if he passes on Thibodeaux and watches him become the second coming of Michael Strahan with the New York Giants (Nos. 5 and 7 picks).

“If we had the Fearsome Foursome, we’d still be wanting to add a pass-rusher,” said Jets coach Robert Saleh, whose 25th-ranked pass rush was anything but fearsome last season. “It’s always going to help. If the opportunity is there, we’ll get it, but we’re not going to force it, either.”

Thibodeaux has the measurables that make scouts drool: 6-foot-4, 254 pounds, with 4.58 speed in the 40-yard dash and a quick get-off (1.56 seconds in his 10-yard split). He recorded 19 sacks and 35.5 tackles for loss in 32 college games. Unlike Michigan’s Aidan Hutchinson and Georgia’s Travon Walker, Thibodeaux didn’t have an NFL-bound linemate to take pressure off him.

On the downside, Thibodeaux isn’t a natural bender, with scouts and talent evaluators saying he has ankle stiffness and “doesn’t really have any pass-rush moves at all,” ESPN draft analyst Mel Kiper Jr. said. In college, Thibodeaux used his straight-line speed and strength to overpower inferior opponents, but he won’t be able to pull that off in the NFL. Another question is his weight. At 254, he’s on the light side for a defensive lineman, although the Jets could use him as a wide-9 rusher in their scheme.

NFL Network analyst Daniel Jeremiah said Thibodeaux lacks the consistency of Hutchinson, projected as the top pick, adding of Thibodeaux, “There are times the effort kind of comes and goes a little bit.” That should be a concern. No prospect is perfect, but max effort should be a prerequisite when you’re investing $30 million in a player.

The Jets, meticulous about adding good character to their locker room, have done a lot of legwork on Thibodeaux, who visited their facility last week. Before that, defensive coordinator Jeff Ulbrich met with him at his pro day in Eugene, Oregon. Coaching staff fit is important for a player like Thibodeaux.

“There are a lot of questions about the up-and-down tape and consistency, but he certainly has the physical tools — the traits — to be a top-5 pick,” ESPN analyst Todd McShay said.

At the scouting combine, Thibodeaux reportedly turned off some teams during interviews by referring to his outside interests. An ESPN report last August said he was scheduled to make about $400,000 in NIL deals. He also has his own crypto currency. Generally speaking, the NFL frowns upon rookies with a lot of endorsements, lest they be distracted by non-football matters.

Thibodeaux is ultra-confident. After his pro day, he was asked by a reporter to recall the most ridiculous thing said about him during the pre-draft process. His reply: “The most ridiculous thing I’ve heard is that I’m not the best player in this draft. I really don’t listen to anything else, but that to me, that’s outrageous.”

Truth be told, the Jets could use some attitude on defense, an alpha personality to rile up the troops. The Thibodeaux narrative is similar to what fellow Los Angeles native Keyshawn Johnson faced in 1996 when he was drafted first overall by the Jets — a ready-made star whose bravado chafed some people. His style wasn’t for everyone, but he played hard and wanted to win.

“People want to know, does he love the game? Is he ‘me’ and ‘I’ or ‘we’ and ‘us?’ That’s the debate with Kayvon,” Kiper said. “I think he’s going to be motivated coming in because people are criticizing him now a little bit, and he never had to deal with that coming out of high school or during his career. He was always celebrated as the No. 1 player. Now he’s not. I think he’ll come in motivated, with something to prove.”

The Jets could have their choice of edge rushers in the first round. Let’s assume Hutchinson is off the board by the fourth pick. Walker could be gone, too, but it’s hardly a guarantee. Thibodeaux and Jermaine Johnson II (Florida State) almost certainly will be available.

Walker is shy on production (only 9.5 career sacks), but he has the best size-speed/athletic measurables among the edge rushers. He’s a notch ahead of Johnson and Thibodeaux in that regard. Johnson and Thibodeaux are comparable to each other in terms of athletic testing, but Johnson (6-5, 254 pounds) has a bigger frame and longer arms. The knock against Johnson, who could last until the 10th pick, is that he was a one-year wonder (12 sacks in ’21) during a three-school college career.

This could be a franchise-altering decision for the Jets, who haven’t had a double-digit sack artist since Muhammad Wilkerson in 2015.

“With Thibodeaux,” Kiper said, “he can be as great as he wants to be.”