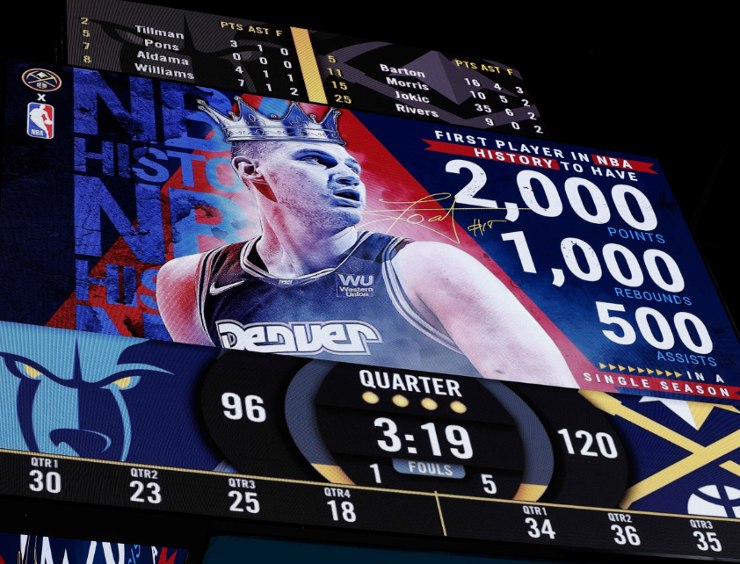 Top MVP candidate Nikola Jokic made history on Thursday night. In the Nuggets’ 122-109 win over the Grizzlies, the center became the first player in the NBA to amass 2,000 points, 1,000 rebounds and 500 assists in one season. This fact alone will help boost his MVP argument. He is attempting to win his second consecutive MVP award of his NBA career.

Furthermore, his most notable standout performances this season were triple-double outings. On Jan. 5, in the Nuggets’ 115-109 loss to the Jazz, the center finished with 26 points, 21 rebounds and 11 assists. Fourteen days later, Jokic closed out his performance with a season-high 49 points, 14 rebounds and 10 assists against the Clippers.

At the end of January, Jokic joined five other players to have at least seven triple-doubles in a single month: Wilt Chamberlain, Michael Jordan, Oscar Robertson and Russell Westbrook. Plus, in Denver’s 127-109 win over Washington on Mar. 16, Jokic became the second-fastest player to earn 10,000 points, 5,000 rebounds and 3,000 assists in one season.

Additionally, the 27-year-old almost broke this record in his 516th career game, but Larry Bird set the record in one less game played. To add to this incredible feat, Jokic became the first NBA player this season to accumulate 5,000 rebounds and 3,000 assists in his first 500 career games. With his leadership, the Nuggets rank sixth in the Western Conference

Since Jokic averaged a career-high 27.1 points per game this season, it makes sense why he is one of the top MVP candidates. According to Basketball-Reference, the player has a hall of fame probability of 43.7%. To officially join the legends, he needs a championship win. It is imperative for all the top players to have at least one ring.

Although Jokic was suspended one game for an on-court physical altercation with Markieff Morris, he’s still the most valuable player for the Nuggets. And, he’s arguably the most valuable player in the NBA. His biggest competition includes Joel Embiid and Giannis Antetokounmpo. Considering the statistics listed above, Nikola Jokic will likely win it again. The odds are in his favor.