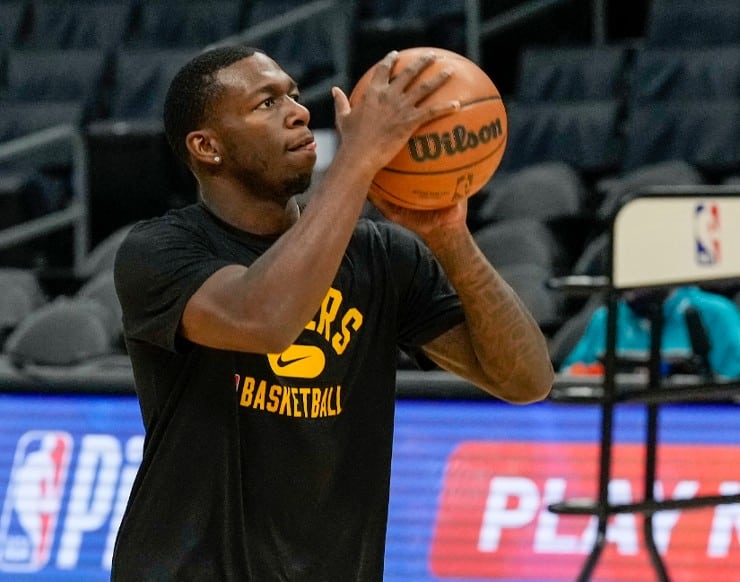 Kendrick Nunn can help the Lakers

While Nunn made All-Rookie First Team in the 2019-20 season, he has played a smaller role on the court since then. Not to mention, injuries derailed his Lakers’ season.

Kendrick Nunn is expected to pick up his $5.25M option with the Lakers next season.

Although he played during the preseason, on Oct. 21, 2021, the medical staff informed the Lakers that Nunn had sustained a bone bruise in his right knee. The timetable for his return was several weeks, but he could never fully recover. Earlier this year, the guard dealt with issues during his rehabilitation. So, he was ruled out throughout February and March.

Furthermore, Anthony Davis attracted media attention over a week ago when he said, “What we could have been if I was healthy all year, LeBron, Kendrick Nunn?” Next season could be the best indicator. In a total of 123 career games, the third-year player has averaged 15 points, 2.9 rebounds, and 3.0 assists per game. Plus, his shooting average from the field is 45.8%.

Anthony Davis: “What could we have been if I was healthy all year, LeBron, Kendrick Nunn? You think about those things. When we put this team together, we looked really good on paper, but we haven’t had a chance to reach that potential with guys being in and out of the lineup.” pic.twitter.com/4yuS4I7AJW

Once LeBron James and general manager Rob Pelinka witnessed Nunn’s performance with the Heat in Game 1 of the 2020 NBA Finals, they had to have him. The guard put up 18 points in 20 minutes played. Until that day, a rookie had not generated even 18 points in a Finals game since Elden Campbell’s 21 points in the 1991 NBA Finals

Could the guard earn a larger contract elsewhere? Last offseason, the Knicks were one of the teams in the hunt for Nunn, and they offered more than the Lakers. The guard’s $5.250 million cap figure for next season represents roughly 3% of the total salary cap.

Current head coach Frank Vogel will probably not return, so Nunn’s future with the organization could change with a new coach. A potential trade in the future might be up to LeBron as well. However, Nunn is worth keeping. Based on Davis’ comments, he needs to stay in Los Angeles.