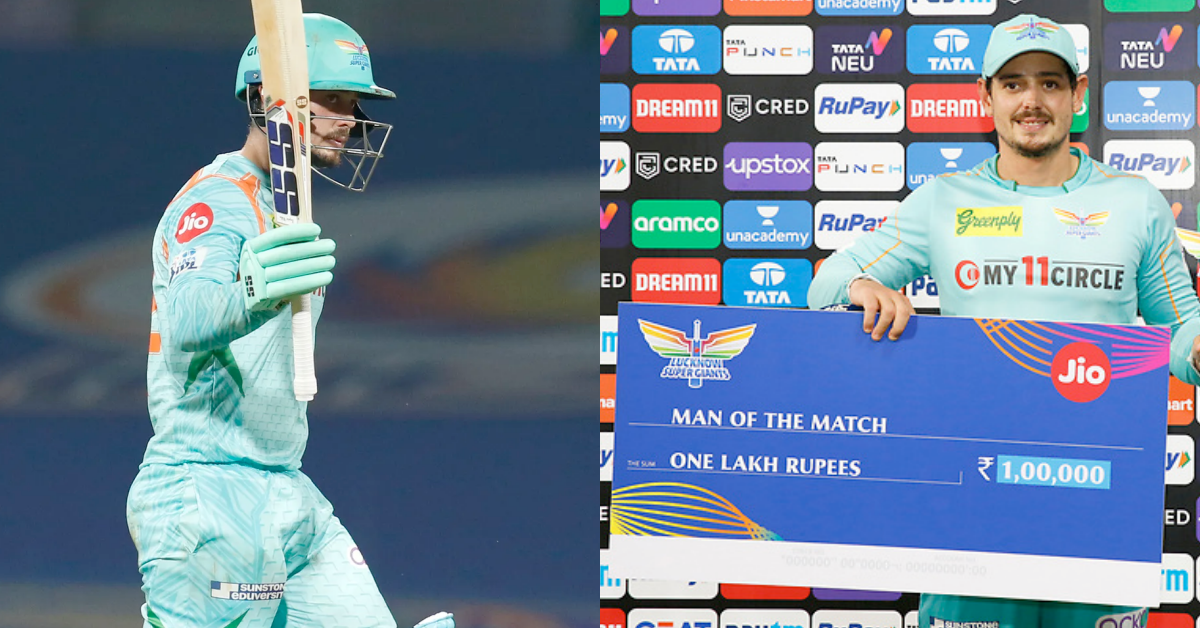 Lucknow Super Giants’ (LSG) opener Quinton de Kock shined with the bat as he helped LSG beat Delhi Capitals (DC) in their IPL 2022 match by 6 wickets at the DY Patil Stadium in Navi Mumbai on April 8, 2022.

KL Rahul won the toss and decided that LSG with field first. Delhi had a difficult time batting on a pitch that was on the slower side. Still Prithvi Shaw top-scored for them with 61 runs in 34 balls with 9 fours and 2 sixes. Rishabh Pant with 39* and Sarfaraz Khan with 36* helped DC make some much-needed runs in the death overs and took them to the final score of 149/3 in 20 overs. Ravi Bishnoi was the pick of the bowlers with 2/22 for LSG.

In reply, the chase was shouldered by Quinton de Kock who smashed 80 runs in 52 balls with 9 fours and 2 sixes to his name. KL Rahul made 24, as the duo Kock gave a brisk opening partnership of 73 in 9.4 overs to Lucknow Super Giants.

In the end, Krunal Pandya with 19* and Ayush Badoni with 10* finished the game in the last over as LSG won the match by 6 wickets as LSG ended on 155/4.

The South African left-hander Quinton de Kock was named the Player of the Match for his amazing 80-run knock on this difficult pitch to bat and he was pretty happy with helping his team win the match.

“It was a matter of just playing what’s in front of you, reacting to it. It was a chaseable score. You want a decent start in the powerplay and we didn’t want to get too ahead in the chase. Was important to keep wickets in hand. Prithvi did make it look easy, for me I also felt that it was a slow surface. Even with the dew, there was a bit of grip. If we were chasing 180, might have been difficult but thanks to our bowlers,” De Kock said after receiving his Player of the Match award.

With this win, Lucknow Super Giants moved up to the second spot in the IPL 2022 points table.

LSG vs DC: I Just Play What Is Put In Front Of Me – Quinton De Kock After His 80 Helps LSG Beat DC