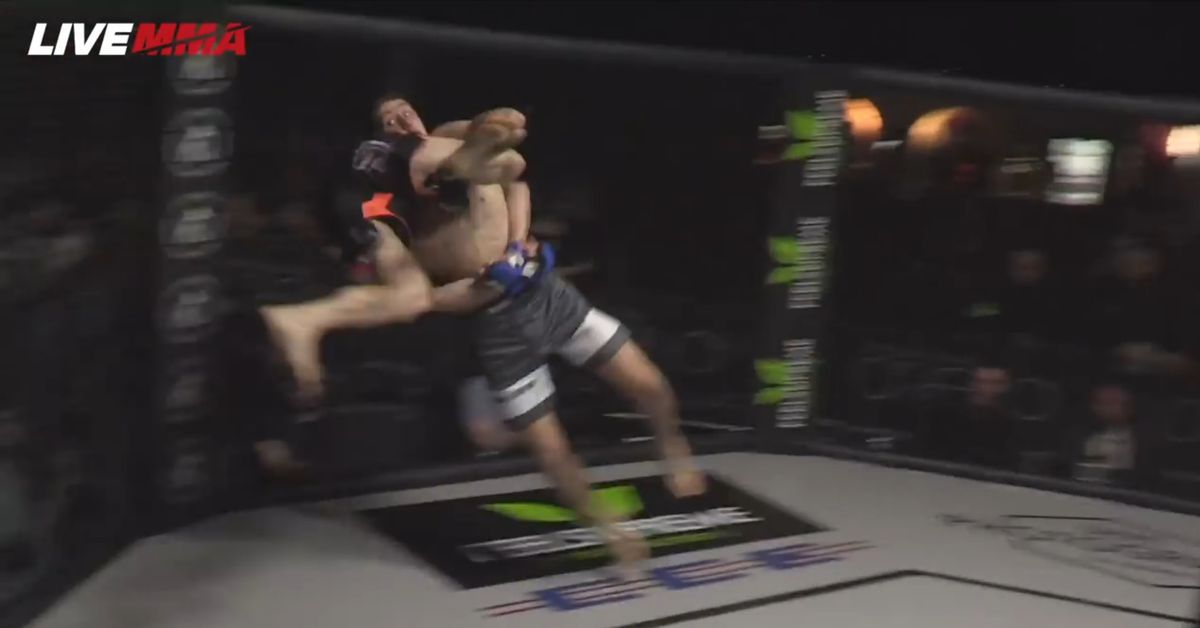 Welcome to the latest edition of Missed Fists where we shine a light on fights from across the globe that may have been overlooked in these hectic times where it seems like there’s an MMA show every other day.

It’s often said when things go awry that one should “leave it to the professionals,” but the sheer chaos of the amateur MMA scene is one reason why we love it so much. With that in mind, we’re going with a pair of non-pro highlights to start us off this week.

(Big thanks as always to @Barrelelapierna for their weekly lists of the best KOs and submissions, and to @Grabaka_Hitman for uploading many of the clips you see here. Give them a follow and chip in on Patreon if you can.)

You know when you’ve seen a great slam when the first thing that pops into your head are Matt Hughes and Frank Trigg.

That’s Ede Jakab taking Macauley Lawless for a ride at BMF MMA 2 in Barnsley, England. Jakab would go on to win the decision, which shouldn’t be surprising given that a slam like that deserves a 10-0 round in my professional opinion.

If only they had the shoddy cage setup from Home Fighting Championship, we could potentially have witnessed the best worst combat sports highlight ever.

Over at Amateur Desafio 23 in Lima, Peru, Juan Castro and Yeison Cardoso were decked out in more traditional amateur gear, but this knockout kick from Castro is worthy of any professional event.

Cardoso was probably wise to give up on that gilly, but not wise enough to remember to defend himself as he stood up. WHAMMY.

BMF MMA 2 is available on pay-per-view replay, while all the fights from Amateur Desafio 23 are available for free on YouTube.

We go from the amateurs to a couple of first-time pros, though that term should be used loosely for Freddy Kemayo. While Saturday marked Kemayo’s first MMA bout, the 39-year-old has nearly a hundred kickboxing bouts on his resume.

There wasn’t much of that technique shown in his unbelievable fight with Xavier Lessou at Ares FC 5 (available on UFC Fight Pass) in Paris as the heavyweights simply threw down for just under six minutes of action.

(credit to @NeoValeTudo for this fantastic supercut of the action)

You know it’s a classic when you have one guy doing the “wildly whip both hands in the same direction” striking technique by the time it’s all over. Amid the chaos Kemayo was able to land a couple of accurate clinch strikes that finally put Lessou down for good.

This is a Fight of the Year candidate and if you don’t agree, listen to this reaction:

Also on the card, Karolina Sobek improved to 4-0 with her third straight submission win, which came against the previously undefeated Mariza Loch (6-1).

Watching a finish set up by a head-and-arm throw is always kind of depressing, but you can appreciate Sobek’s killer instinct here as she immediately put her legs to work securing a nasty Americana.

Unsurprisingly, a Brazilian Fighting Series show in Curitiba this past weekend also featured a promising mix of up-and-comers and prospects just beginning to find their footing.

Joao Elias (17-3-1, 1 NC) fits in the former category as the 27-year-old needed just 31 seconds to armbar an overmatched Matheus Gabriel (8-5) and capture a vacant flyweight title.

It’s nice to see Elias being mentioned for a highlight-reel win as opposed to, say, brawling with his opponent behind a referee’s back leading to a result that Tapology officially lists as “No Contest: Fighters Attacked Each Other During Timeout.”

I’m gonna have to ask Gui Cruz about the veracity of this tweet claiming that Richard Jacobi is the “best heavyweight prospect in Brazil,” but 5-0 at 28 years old with four of those wins coming by first-round knockout is something to build on. We’re always looking for fresh blood in the big boy division so forgive us when we get overexcited from time to time.

It should be noted that his opponent Jose Rodrigo Guelke, while experienced, has now lost four straight fights in the first round and has a record of 22-23.

Leonardo Diniz also scored a great finish, but let’s show some respect to Jefferson Santos too for somehow not getting knocked out clean by this head kick.

And we close out this portion of the show with one more debutante, as Geovanna Moura put away 13-fight veteran Paula Vieira, better known for playing the role of enhancement talent in the past for fighters like Marina Rodriguez, Janaisa Morandin, and Ariane Lipski.

It’s always nice to check in on how former big show fighters are acquitting themselves back in the wild (if you want to see how former Bellator champ Will Brooks picked up his latest win, you can watch the grisly clip here. I haven’t and won’t.)

That speedy knockout marked Worthy’s second straight win since returning to 247 Fighting Championships. Just goes to show that you can go home again.

We go from a fighter recently in the UFC to one who has to be knocking at that door any day now, undefeated bantamweight Yakov Ekimov.

That vicious 68-second knee knockout puts Ekimov at 13-0 now with four straight knockouts. We’ve been saying for months now that Ekimov is ready to sign with a major promotion and at 34, he’s not getting any younger.

I’m hoping that most of you tuned in to the PFL season opener as it turned out to be a wildly entertaining affair capped off by a legitimate Fight of the Year candidate between Clay Collard and Jeremy Stephens. You can catch video highlights here if you missed them, as well as Omari Akhmedov’s wicked first-round dusting of Viktor Pesta.

The very first fight of the night likely got lost in the shuffle, so let’s show some love to Simeon Powell for this high knee knockout that gives us our Humpty Dumpty Fall of the Week.

Have a great weekend everyone, may it be as rich and fulfilling as DeWitt Dixon’s!

What was the most memorable Missed Fists moment this week?

If you know of a recent fight or event that you think may have been overlooked, or a promotion that could use some attention, please let us know on Twitter – @JedKMeshew and @AlexanderKLee – using the hashtag #MissedFists.