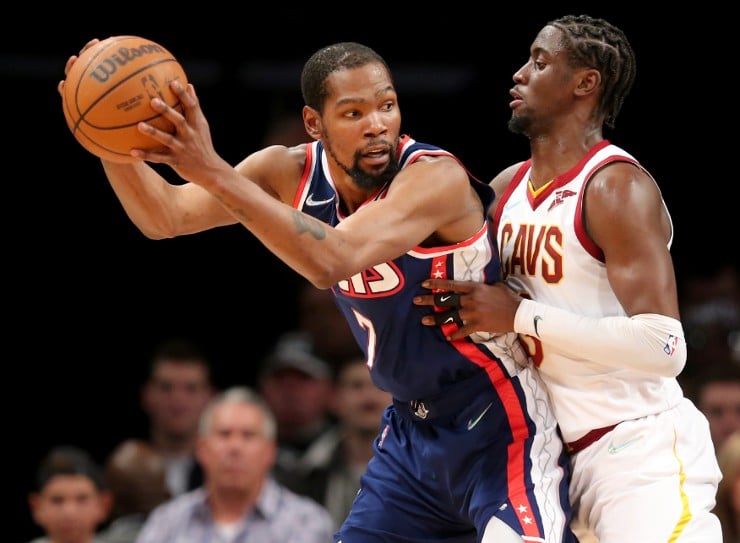 Next, the Los Angeles Clippers square off versus the Minnesota Timberwolves at 9:30 p.m. ET. Both games can be watched live on TNT. Also, for live streaming, Sling TV, Hulu + Live TV and YouTube TV offer free trials. BetOnline odds are posted below.

To kick off the NBA Play-In Tournament for the 2021-22 NBA season, the Cavaliers (44-38) are aiming to upset the Nets (44-38) at Barclays Center. Seventh-seeded Brooklyn is a eight-point favorite at home. According to the Nets’ injury report, guard Seth Curry is listed as questionable for this game. And, guard Goran Dragic remains out indefinitely.

Plus, the Cavs’ Jarrett Allen and Dean Wade remain out indefinitely. Brooklyn is entering this tournament on a four-game winning streak. As for the eighth-seeded Cavaliers, their 133-115 home win over the Bucks on Sunday put an end to their three-game skid.

Upon further review of these teams’ head-to-head records this season, the Nets finished 3-1 against them. Cleveland’s only win came on Jan. 17, when the team defeated Brooklyn 114-107 at Rocket Mortgage FieldHouse. Notwithstanding the Nets’ issues internally, oddsmakers are still expecting them to put away with a win.

Additionally, since the Nets are 12-5 in their last 17 games played, they have the advantage in this Eastern Conference matchup. In the end, pick the Nets to win, the Cavs will cover the spread and the total will go over 228. Other NBA Play-In Tournament odds, predictions and best NBA bets will be featured on Tuesday.

Moreover, the eighth-seeded Clippers (36-44) are playing the seventh-seeded Timberwolves (55-25) at Target Center. Los Angeles defeated Oklahoma City 138-88 to finish its regular season on Sunday. Clippers’ guards Nicolas Batum and Luke Kennard are listed as questionable for this contest. The team is currently on a five-game win streak.

Not to mention, the total has gone over in eight of the Clippers past 12 meetings against Western Conference opponents. And, Los Angeles closed out its regular season with a 17-24 away record. Now is about the time the team could really use Kawhi Leonard.

Equally important, on the other side, the Timberwolves’ D’Angelo Russell is questionable on the injury report for this matchup. They are 3-2 in their previous five contests. The total has gone over in six of the team’s last seven games. Minnesota’s record at home is 26-14.

Besides injuries, feel free to study other head-to-head encounters this season. Thus far, Los Angeles is 3-1 versus Minnesota. On Jan. 3, the Timberwolves bested them 122-104 at Crypto.com Arena. As a result, gamblers are convinced that Minnesota is the best bet; hence the team is a three-point favorite.

Furthermore, with everything taken into account, pick the Timberwolves to win, they will cover the spread and the total will go over 230.5. However, this game could come down to the final basket. As stated above, more NBA Play-In Tournament odds, predictions and best NBA bets will be viewable on Tuesday.