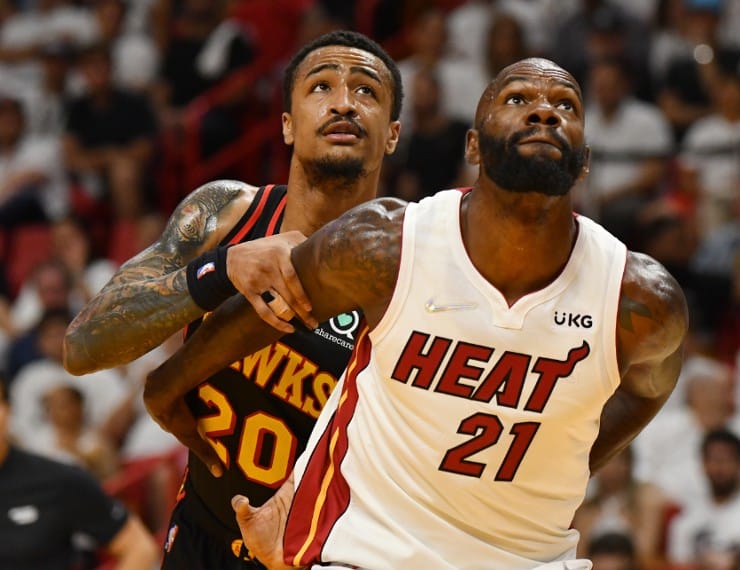 Today, six teams are preparing for Game 2 of the first round of the 2022 NBA Playoffs; free NBA playoffs picks, best NBA bets and odds are available here. For Game 2, the Atlanta Hawks square off versus the Miami Heat at 7:30 p.m. ET. Next, the Minnesota Timberwolves are taking on the Memphis Grizzlies at 8:30 p.m. ET.

Then, the New Orleans Pelicans are playing the Phoenix Suns at 10 p.m. ET. The Hawks-Heat and Pelicans-Suns games will air live on TNT, while the Timberwolves-Grizzlies contest can be viewed on NBA TV. BetOnline odds and free NBA playoffs picks are featured below.

Upon further review of the Hawks’ injury report, the team has two players listed: SG Bogdan Bogdanovic (probable) and SG Lou Williams (out). After Atlanta’s Game 1 defeat, the team is now 1-4 in its last five matchups versus Miami. The total has gone under in four of the Hawks’ past five road games as well.

As for the Heat’s injury list, the team has five players listed as questionable to play. Gabe Vincent is listed as probable to play in tonight’s game, too. The Heat are 7-1 ATS in their previous eight contests. And, they are 7-1 in their last eight meetings at home against the Hawks. Atlanta has not defeated them since Jan. 21.

Referencing the point spread consensus, 84% of gamblers are putting bets down on the Heat to cover the spread at home. Not to mention, 57% of bettors are anticipating the total will go over 218.5. So, pick the Heat to win, they will cover the spread and the total will go over 218.5. Other NBA playoffs picks, best NBA bets and odds are on the main page.

Will the Grizzlies bounce back against the Timberwolves tonight? Minnesota upsetted them in Game 1, winning 130-117 at FedExForum. More importantly, was the first game a fluke? In the opening quarter, the Timberwolves outscored them 41-33. Anthony Edwards led Minnesota in scoring with 36 points.

According to the Timberwolves’ injury report, Taurean Prince is listed as questionable to play in Game 2. Including this victory, the team is 3-8 in its past 11 matchups versus the Grizzlies. Minnesota is also 1-5 ATS in its previous six road meetings against Memphis. Statistically, the Grizzlies are the better contender. However, maybe the Timberwolves want it more.

Moreover, on the other side, the Grizzlies’ Killian Tillie was downgraded to out for Game 2. And, Santi Aldama is listed as questionable to play. While oddsmakers still favor the Grizzlies to advance to the next round of the 2022 NBA Playoffs, they are 1-4 in their past five games played. Bettors need to witness a statement-win tonight by Memphis.

Otherwise, folks will start to turn on the home team. Plus, the Grizzlies are 10-2 in their previous 12 home games. They have to recover in this one. Taking everything into account, pick the Grizzlies to win Game 2, they will cover the spread and the total will go under 241. More NBA playoffs picks, best NBA bets and odds are on the main page.

Furthermore, the Pelicans are aiming to even the series against the Suns tonight. Phoenix defeated New Orleans 110-99 in Game 1 on Sunday. In this matchup, 19 of Chris Paul’s 30 points were scored in the fourth quarter alone. Also, the guard finished with 10 rebounds. Despite the Pelicans outrebounding them 55-35, the Suns generated 50 points in the paint.

For interested bettors, the total has gone under in 12 of New Orleans’ past 16 contests. To add to that betting trend, the Pelicans are 1-5 in their previous six meetings against the Suns. Keep in mind, the team is 1-5 in its last six games when playing as the underdog, too. The Suns have their number. Unless you have a great reason to bet against Phoenix, it’s better to stick with the favorite in this series.

Lastly, the Suns are 2-2 in their last four contests. Right now, they are nothing special. Though, they finished the regular season with a league-best 64-18 (.780) record. Can they sweep the Pelicans? Despite the total going under in several of New Orleans’ contests, the total has gone over in nine of Phoenix’s past 13 matchups against the Western Conference contender.

Additionally, for the point total consensus, 87% of gamblers are convinced that Phoenix will cover the spread at Footprint Center. Besides the point total, 75% of bettors are leaning towards the total going under 221.5. For that reason, pick the Suns to win Game 2 and they will cover the spread. The total will likely go over 221.5. Other NBA playoffs picks, best NBA bets and odds are on the main page.

BetOnline is one of the best sportsbooks in Arizona, Florida, Georgia, Louisiana, Minnesota and Tennessee.