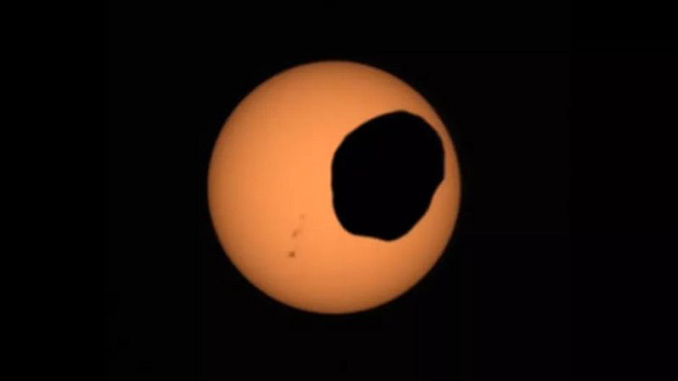 In one of the most amazing and dramatic images of recent years, NASA’s Perseverance Mars rover’s Mastcam-Z camera has captured Phobos, the larger of Mars’ two small moons (27 x 22 x 18 kilometers), as it transited the Sun’s disc on 2 April. Phobos is clearly seen as oval-, or potato-shaped as it crossed over the Sun in a journey that lasted a little over 40 seconds.

This image is the most zoomed-in, highest-frame-rate observation of a Phobos solar eclipse ever taken from the Martian surface. Observations such as this further planetary scientists’ understanding of Phobos’ orbit and how over time its gravity affects the red planet’s crust and mantle.

Heavily-cratered Phobos orbits Mars once every seven hours and 39 minutes, so about three times every Earth day. Its nearly circular orbit is just 6,000 kilometers from the surface of its parent; no known moon in the Solar System orbits its planet as close. This proximity to Mars is causing Phobos to gradually spiral inward, ultimately leading to disaster by breaking up or crashing into the surface of the red planet within 50 million years.