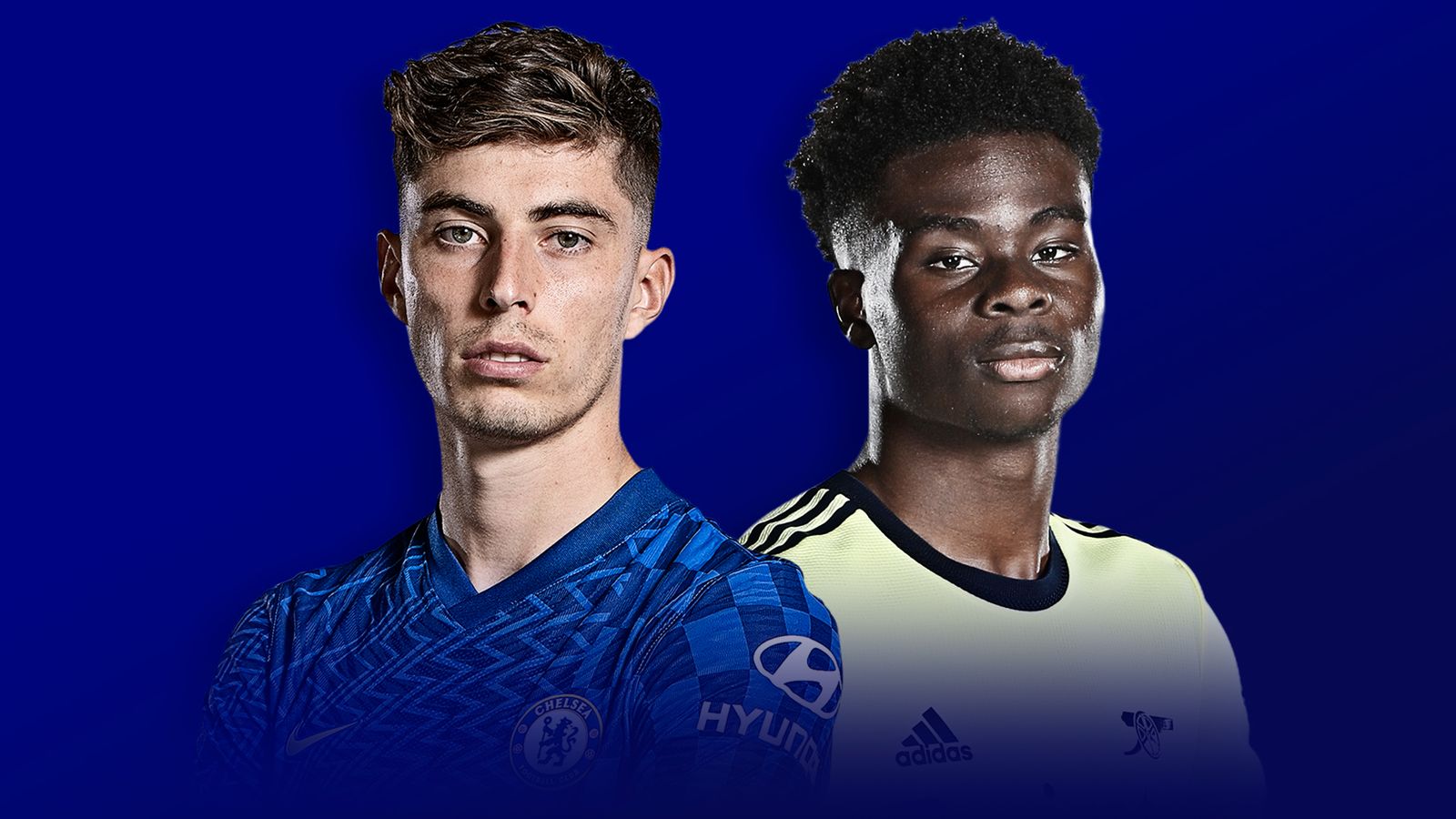 Team news, stats, predictions and how to follow the Premier League this week, including Chelsea vs Arsenal live on Sky Sports on Wednesday.

The club-record signing has not started a Premier League game for two months due to injury and lack of form, but Tuchel suggested Lukaku may be needed in an effort to ease the load on Kai Havertz.

The Blues must do without midfielder Mateo Kovacic, who will miss at least a fortnight with ankle ligament trouble.

Callum Hudson-Odoi remains sidelined with a back problem, but is on the road to recovery, while Ben Chilwell will not play this season in his long-term rehabilitation after knee surgery.

Arsenal will assess Alexandre Lacazette, who missed out at the weekend due to a positive Covid result, ahead of the trip across London. Full-back Takehiro Tomiyasu is nearing fitness after missing the past 11 weeks with a calf problem but is not likely to return against Chelsea. With Lacazette a doubt, Eddie Nketiah could once again lead the line. 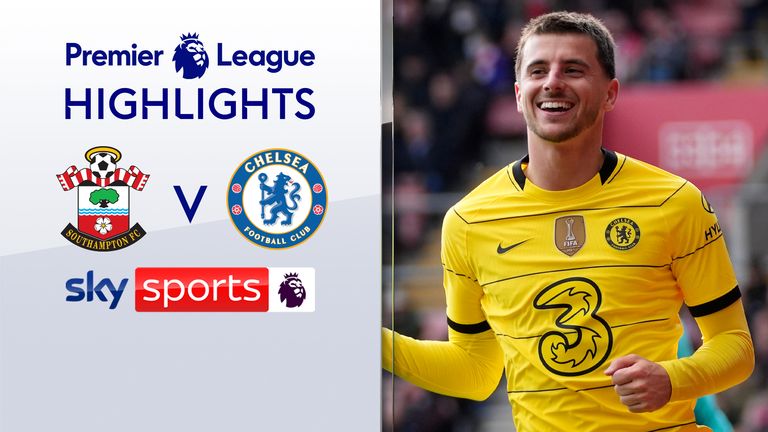 FREE TO WATCH: Highlights from Chelsea’s win against Southampton in the Premier League

Thomas Tuchel takes charge of Chelsea for the 50th time in the Premier League and he can celebrate that milestone by keeping another clean sheet against the misfiring Gunners, who look set to lose a fourth straight Premier League game for the first time since 1995.

Tuchel’s side have kept 25 clean sheets in his 49 Premier League games in the hot seat. It’s resulted in his team having conceded the fewest goals of any Premier League side during his reign at the club (36).

Arsenal aren’t a million miles away from being able to compete with Chelsea when at full strength but their lack of cover in key areas of the field is threatening to derail what has been a very positive season.

Without Kieran Tierney and Thomas Partey, Arsenal’s win rate in the Premier League drops from 71 per cent to 36 per cent. In 14 games this season when both have been missing, Arsenal have lost eight of those matches. Mikel Arteta’s side have also lost all five Premier League games against the current top three by an aggregate score of 15-1.

Having scored just two goals in their last five Premier League games, confidence in attack must be at rock-bottom so a Chelsea win to nil certainly makes appeal at the prices. 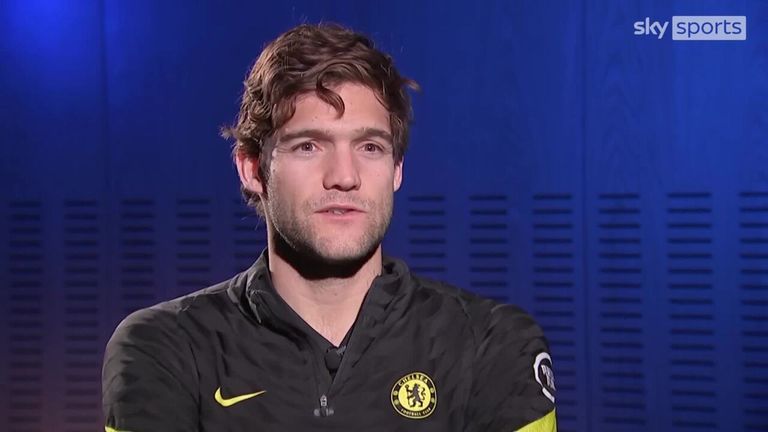 How to follow: Chelsea vs Arsenal is live on Sky Sports Premier League from 7pm; kick-off 7.45pm. Sky Sports customers can watch in-game clips in the live match blog on the Sky Sports website and app. Highlights will also be published on the Sky Sports digital platforms and the Sky Sports Football YouTube channel shortly after the final whistle. 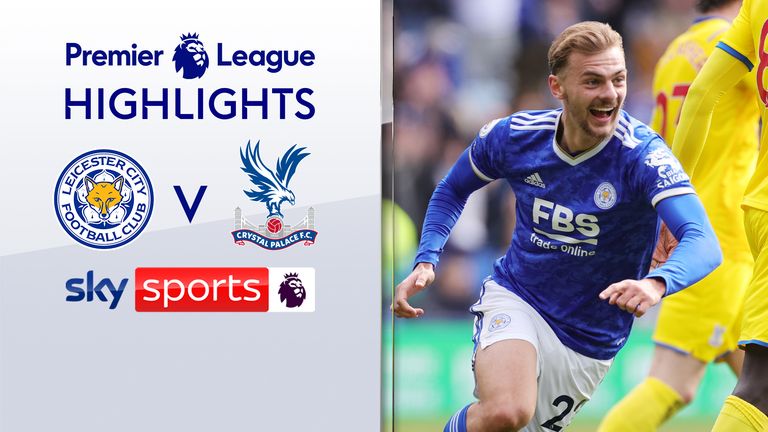 FREE TO WATCH: Highlights from Leicester’s win over Crystal Palace in the Premier League

Team news: Everton will be able to call upon the services of defender Yerry Mina who has been absent since early February, as well as midfielder Donny van de Beek with the latter overcoming brief injury and illness struggles in recent weeks.

Leicester are still without Jamie Vardy, who remains on the comeback trail alongside Wilfred Ndidi, Danny Ward and Ryan Bertrand. James Maddison, Jonny Evans, Ricardo Pereira and Kelechi Iheanacho are among those who could be drafted back in from the start – Maddison and Iheanacho were both introduced from the bench against Newcastle last time out.

Leicester City are set to play a huge part in whether Everton will be a Premier League team next season. Brendan Rodgers’ side face the Toffees twice in the run-in after various postponements and rescheduling of both fixtures due to Covid and Leicester’s European campaign. Having to play Leicester twice surely is a great result for Frank Lampard’s side, especially with fixtures to come against Liverpool, Chelsea and Arsenal.

They are completely unbackable here though.

FREE TO WATCH: Highlights from Everton’s win against Manchester United in the Premier League

A fully wound up Leicester side with Jonny Evans and the huge figure of Wesley Fofana in their ranks trading at 2/1 with Sky Bet to beat Everton would usually get my punting juices absolutely flowing. But at this stage of the season where teams have eyes on other commitments, punters do have to tread carefully when making investments on particular teams.

With Goodison Park likely to be in raucous mood – a location where Lampard has generated nine points from a possible 15 available since taking charge – I’m going to swerve my gut instinct to back Leicester at what looks a tasty price. Play the draw. 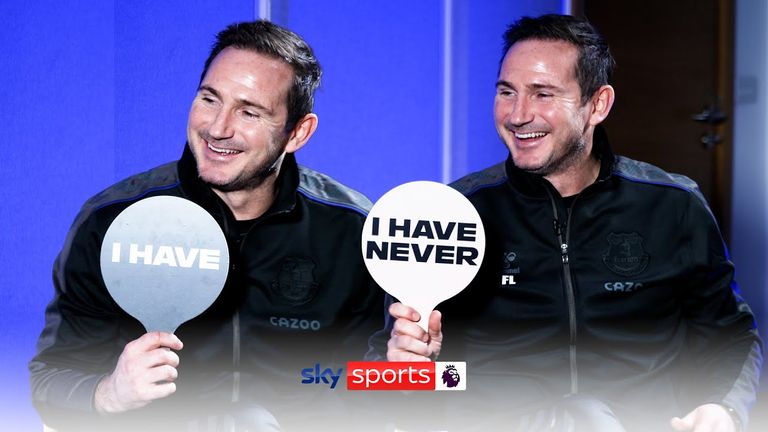 How to follow: Follow Everton vs Leicester in our dedicated live match blog. Highlights will also be published on the Sky Sports digital platforms and the Sky Sports Football YouTube channel shortly after the final whistle. 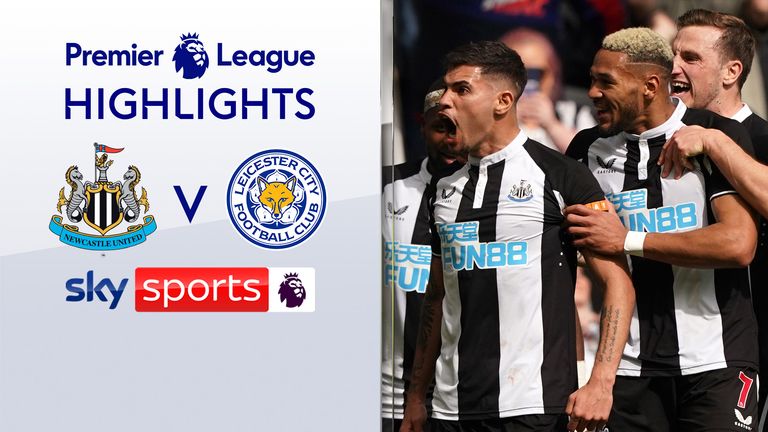 FREE TO WATCH: Highlights from Newcastle’s win against Leicester in the Premier League

Crystal Palace can welcome back Chelsea loanee Conor Gallagher, who was ineligible to play against his parent club at Wembley on Sunday, but Luka Milivojevic is ruled out through injury.

Newcastle have taken 26 points from 13 Premier League games in 2022, winning eight of those matches. In a Premier League table just including games since New Year’s Day, Newcastle would be third. At an odds-against price of 13/10 with Sky Bet, I think they can be trusted here.

But my main play sees me rolling the dice on Dan Burn to score again. He’s going to pop up before the end of the campaign.

Good quality chances have fallen Burn’s way in his 10 starts for Newcastle which have equated to an expected goals figure of 0.97, including two shots on goal in the win over Leicester, where he was the target for every set piece pumped into the box – as seen for his part in the opening Toon goal. He’s the value play to score a header against a side that have conceded 10 goals from corners this season – only Leicester have shipped more. 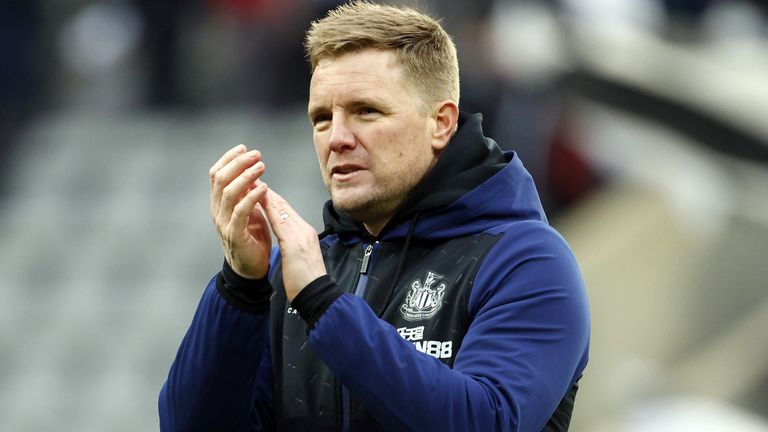 How to follow: Follow Newcastle vs Crystal Palace in our dedicated live match blog. Highlights will also be published on the Sky Sports digital platforms and the Sky Sports Football YouTube channel shortly after the final whistle. 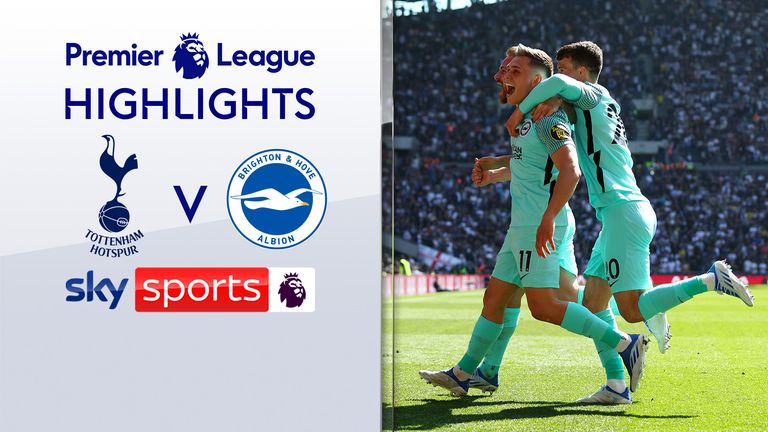 FREE TO WATCH: Highlights from Brighton’s win against Tottenham in the Premier League

Team news: Man City are missing Kyle Walker, who is yet to recover from an injury picked up during last week’s ill-tempered meeting with Atletico Madrid. Kevin De Bruyne, Ruben Dias and Ilkay Gundogan are all expected to be in the mix, but are not guaranteed from the start. Gabriel Jesus is a doubt after receiving a knock at Wembley against Liverpool.

Steven Alzate missed the Tottenham match through illness but is back in training and could be involved.

Kevin De Bruyne is on course for his highest goalscoring tally of his career this season. A player usually associated with creating chances is now scoring them.

His strike against Liverpool was the first time in his career he had scored in four consecutive matches in all competitions. He is also on track to break his personal tally of goals in a Premier League season now – that goal being his 11th with his record standing at 13. The Belgian is now aiming to score in three consecutive league games for the first time since October 2015 – and City should provide him with ample opportunities as a big performance is expected after Pep Guardiola decided to rest many of his key men in midweek.

Graham Potter may shuffle his pack regularly in terms of players but the structure and attacking ethos of the team always remains the same even when taking on Manchester City. It usually ends up with them playing far too open and conceding a bucket load of goals against Guardiola’s team. Since taking the job, Potter has conceded an average of 3.3 goals per 90 minutes (20 in six games) to Manchester City. There shouldn’t be too many problems for City in this one.

FREE TO WATCH: Highlights from Manchester City’s draw with Liverpool in the Premier League

How to follow: Follow Man City vs Brighton in our dedicated live match blog. Highlights will also be published on the Sky Sports digital platforms and the Sky Sports Football YouTube channel shortly after the final whistle. FREE TO WATCH: Highlights from West Ham’s draw against Burnley in the Premier League

Team news: Ashley Westwood was stretchered off with a serious ankle injury as Burnley held West Ham to a hard-fought draw at the weekend.

Club captain Ben Mee, Erik Pieters (both knee) and Johann Berg Gudmundsson (calf) are also sidelined and set to be ruled out for the rest of April.

Southampton will travel to Turf Moor with plenty of “options”, manager Ralph Hasenhüttl advocated ahead of the rearranged tie. Following victory over Arsenal last time out, Saints once again have a full squad of players to select from.

Burnley’s change of mentality to playing “must-win” football in the last three matches has seen a positive effect on how many goals there will be in their games. Games have been much more open affairs with their past three seeing seven goals scored and a total expected goals figure of 13.45 when collating both teams. That xG figure tells the whole story.

How the 1-1 draw with West Ham stayed under 2.5 was all about the sheer brilliance of Nick Pope and general wasteful nature of Maxwell Cornet from 12 yards.

Southampton are a reliable team when it comes to goal heavy matches, too. Their away games this season have averaged 3.27 goals per 90 minutes with 60 per cent of those matches producing four or more goals.

The markets have the goal line around 2.5 goals, which I think is too low. This means backing overs is the way to go. FREE TO WATCH: Highlights from Southampton’s win against Arsenal in the Premier League

How to follow: Burnley vs Southampton is live on Sky Sports Premier League from 7.30pm; kick-off 7.45pm. Sky Sports customers can watch in-game clips in the live match blog on the Sky Sports website and app. Highlights will also be published on the Sky Sports digital platforms and the Sky Sports Football YouTube channel shortly after the final whistle.

How the table stands

How to watch Premier League highlights on Sky Sports Digital

Anybody in the UK can watch highlights for free on the Sky Sports app or the Score Centre app on your iPhone or Android:

To watch the highlights on the Sky Sports App, download the app:

Sky Sports’ digital platforms are the home of live blogs for every Premier League game, including commentary, analysis and team line-ups. Users with a free Sky ID can watch in-game clips from Sky live games in our dedicated live blogs.

Head over to Sky Sports Football YouTube channel to watch highlights for free.

Since launching in 2017 the channel has amassed over 2.5m subscribers, and also houses Football League highlights and Nations League goals.