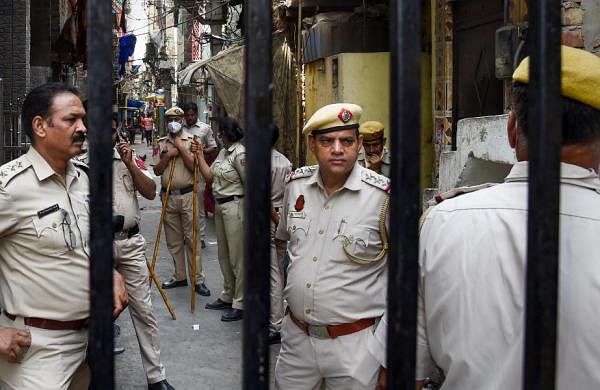 NEW DELHI: The situation in Jahangirpuri of northwest Delhi is heading towards normalcy amid heavy deployment of security personnel in the violence-hit area, police said on Tuesday.

Some of the shops, mainly of grocery, in the streets have opened and the movement of people is becoming normal, they said.

Over 500 police personnel and six companies of additional force have been deployed in the area round the clock.

Besides, a total of 80 tear gas gun parties and water cannons have been deployed and drones are also being used in sensitive areas for rooftop surveillance, police said.

Clashes broke out between two communities during a Hanuman Jayanti procession in Jahangirpuri on Saturday, in which eight police personnel and a local resident were injured.

According to police, incidents of stone-pelting and arson were reported during the clashes and some vehicles were also torched.

Meanwhile, the road in front of the mosque where the procession was allegedly attacked has been shut and the entire area cordoned off with barricades by police.

Police have also pitched tents near the barricades.

All senior officers have been instructed to be at the spot to avoid any untoward incident.

On Monday, a peace march was organised by police, along with the members of Aman Committee, in the Jahangirpuri area.

The committee appealed to the people of the area to maintain peace and harmony, not to spread and trust rumours or misinformation and to report mischievous activities, police said.

On Monday, Delhi Police Commissioner Rakesh Asthana said that the presence of police personnel in sensitive areas, including Jahangirpuri, will continue till the situation becomes normal.

Speaking to a television news channel, Asthana had said, “We have deployed adequate force not only in Jahangirpuri, but in other areas also. We will use technology for surveillance and are monitoring the situation to make sure that no untoward incident occurs in the future.”