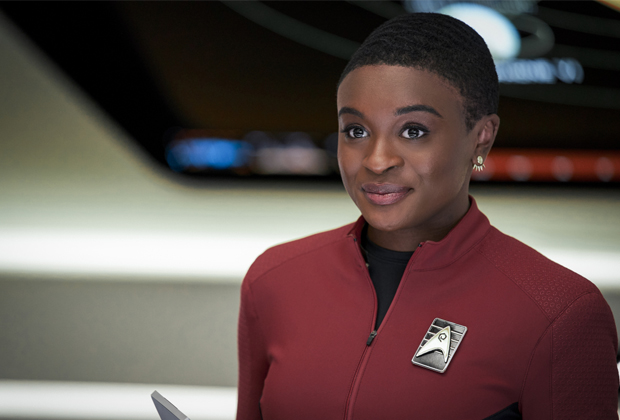 A young Nyota Uhura (played by Celia Rose Gooding) will take to the stars when Star Trek: Strange New Worlds premieres Thursday, May 5 on Paramount+.

Set in the years Pike helmed the Enterprise, the series follows Pike (Anson Mount), Spock (Ethan Peck) and Number One (Rebecca Romijn) as they explore new worlds around the galaxy. The Uhura that fans will meet in the coming episodes is an intelligent and enthusiastic newbie cadet just getting acclimated aboard the U.S.S. Enterprise.

“I think the first thing that people were really keeping an eye out for was that I chopped off all her hair, and I love it,” Gooding tells TVLine. “[What] was incredible with Nichelle’s Uhura and Zoe’s Uhura was that they had the epitome of what Black femininity was at the time.” 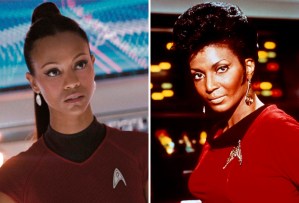 In the ‘60s, Nichols’ stuck to the classic bouffant look, in which hair is puffed out and framed around the face. Meanwhile, Saldana’s version adopted the high ponytail with long extensions down the back in Abrams’ first Star Trek film, which was released in 2009.

“Now we’re in [2022], and I think the iconic short Caesar cut has been a thing for Black men for a long time, but we are slowly but surely as a community getting closer and closer to widening the ideals of what Black femininity looks like,” she adds. “Having an opportunity to take on the iconic character and still give her this layer of incredible grace… and also have her have this incredibly gorgeous short cut look — it just feels so right to me. Even with the Dora Milaje in Black Panther, their femininity was never questioned, but they all had real short cuts.”

Gooding notes that she is “craving to be a part of the representation I want to see in the world, and so it was very important for me to not put a wig on, to not have really long, straight, big curly hair. I could have a beehive, or I could have hair down my back, or I could have no hair and rock a bald cap, and I would still be the incredibly iconic feminine embodiment of Uhura that I think everyone is really excited to see.”

Star Trek: Strange New Worlds Star Celia Rose Gooding: It Was ‘Important for Me to Not Put a Wig On’ as Uhura