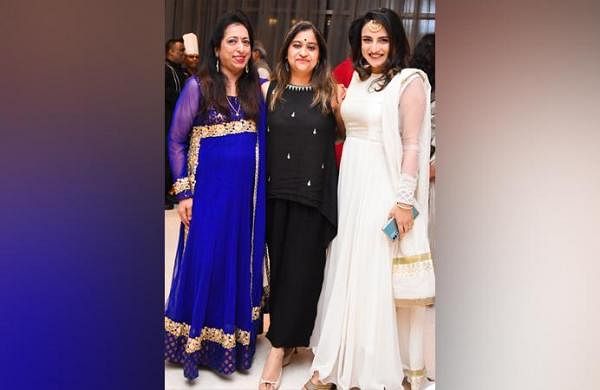 BENGALURU : Sometimes Bengaluru’s weather lulls me into a false sense of security. The searing heat is only broken by a sudden cloud-burst of rain. We are quick to rejoice thinking that these are the proverbial April showers sent to cool our city just like the days of yore! ‘When the temperatures soar the heavens roar!’ But, after a short spell of dipping temperatures, Bengaluru heats up again.

Heat does not agree with me. I become a tad short-tempered and crabbity and tying up my hair gives me a headache. I am a little OCD about personal hygiene, so a whiff of an odour can set me off. But, it is in this season that one can separate the riff from the raff. Heavy silk or artificial clothing is a big no-no! I think that namma-ooru has become savvy about that.

We were invited by the affable Aslam Gafoor, for an Iftar dinner at Hotel Oakwood. All the invitees looked resplendent in their traditional attire, but I did notice that most of them stuck to linens, chiffons and cottons. It jelled perfectly with the fantastic Iftar feast, where some specialties came from different corners of the country. Everybody there looked as cool as a cucumber with no sweaty handshakes and hugs. It was great to meet up with friends like whom I hadn’t seen in a while.

Weaving one’s way through summer is a tricky process. Armpits turn into (snake) charmers pits and the skin dries up. An observant friend was once horrified at a ‘fashionista’s’ cracked heel that peeped out from under her very expensive saree. Body odour, cracked heels and infrequent showers will not hold you in good-stead this sweltering summer. As it’s simmering… people get disparaging.

On the flip side, it’s a great time to travel. Short breaks away from the city always uplift my spirits. I think it’s really important to clear the cobwebs and see things with a renewed perspective. Finishing half-read books, having long conversations with friends and clearing out the old to give place to the new. It takes time but one’s mind does evolve if you give it the time to heal. Bad behaviour can ever be justified or condoned.

I was overjoyed when my dear friend from college, Usha Pan (as we fondly called her) contacted me. The last I saw of her was when I was on holiday in the US and she flew down from Canada to meet me. Years melted away as I screamed her name on the phone. Usha Pan was always fabulous looking and demure compared to the highly strung laughing hyenas that we were. She is the same, soft-spoken

, smiling and a generous person who would laugh uproariously every time I cracked a joke.

We were married in the same year to two handsome strapping young men, who are now pot-bellied and balding. We laughed that we still looked the same, but they had changed! Lunch in the stately dining room at the Bangalore Club was nostalgic as we used to come there as teenagers when we ‘bunked’ classes. Years melted away as we spoke non-stop, laughing and giggling. The extra-long hug as we said goodbye said it all…sometimes friendships are timeless.