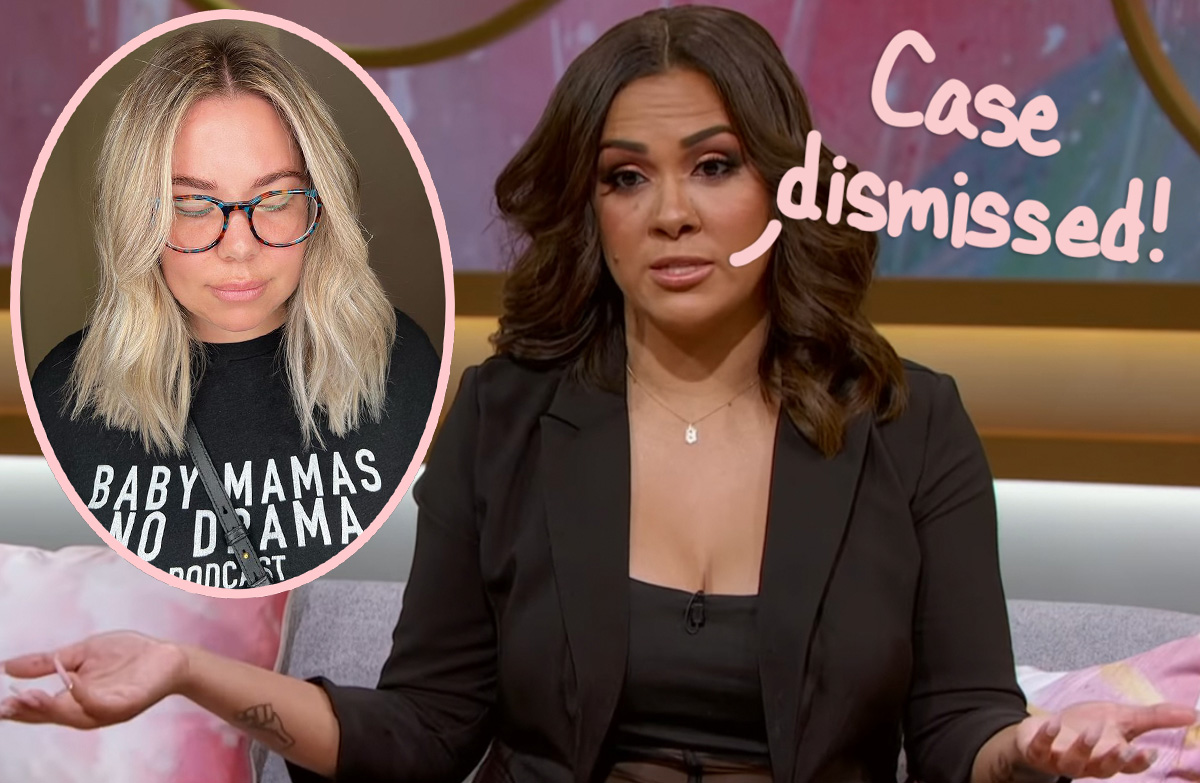 You can put a pin in the legal drama between Kailyn Lowry and Briana DeJesus.

After about nine months of proverbially duking it out in court, the Teen Mom 2 stars are going to have to move on however they feel is best after Kailyn’s defamation lawsuit against Briana was officially dismissed by a judge on Monday.

Us Weekly and others confirmed the dismissal, noting that a court has extinguished the ongoing litigation in DeJesus’ favor by tossing out Kailyn’s claims. As Perezcious readers will recall, the pair had been battling in court after Lowry sued DeJesus in the summer of 2021, claiming her reality TV rival had falsely asserted Kailyn had physically assaulted Chris Lopez, the father of her two youngest sons Lux, who is now 4, and Creed, who is nearly 2.

Lowry was initially arrested amid the alleged incident with Lopez, which took place late in 2020. However, the Pride Over Pity author was soon released from police custody, and charges against her regarding the alleged altercation were eventually dropped. Still, that didn’t stop Lowry’s legal battle with DeJesus after the 30-year-old mom of four took issue with what she termed were false allegations made by Briana about Lopez’s supposed assault and an alleged break-in at his home.

All that ends now, though. According to the mag, which obtained court docs related to the dismissal, a judge decided that Briana’s statements were “substantially true.” Writing in the dismissal decision, the judge shared:

“[Briana DeJesus] Soto’s statement about ‘breaking and entering’ does not change the gist of the statement that Lowry had been arrested. It was widely publicized that Lowry had been arrested for domestic violence and Soto’s comments on the issue were substantially true. The damage to Lowry’s reputation, if any, had already occurred when the incident was publicized by news media.”

And the judge added more:

“Even if the isolated statement regarding ‘breaking and entering’ can be considered defamatory, there is insufficient evidence to establish that Soto [DeJesus] knew the statement was false at the time it was made. … As a matter of law, Lowry has not met her burden regarding the issue of malice.”

Hours later, the 27-year-old MTV star took to her Instagram Stories to post images of several screenshots of clown costumes for sale on Amazon.

Signaling with the screenshots that she was going to buy one of the costumes for Lowry — trolling the Coffee Convos podcast host over supposed clownish behavior — Briana also credited her lawyer in one of the snaps:

Briana followed all of those pics up by sharing a series of screenshots pulled directly from the judge’s dismissal decision, relaying key points from the court docs to her fans on Instagram.

Related: Kailyn Explains Why She Doesn’t Give Her Kids Christmas Presents!

As for Kailyn, the 30-year-old shared a more subdued message following her legal loss, writing this on her own IG Stories on Monday:

“While today’s ruling is unfortunate, I have to respect the judge’s decision. With that being said, I stand by my truth and the information spread about me is still not true. I would like to thank my legal team for fighting for me, and I am looking forward to life after this lawsuit so I can focus my energy solely on my boys and my future business endeavors.”

So there you have it! Now, whether or not they agree with the judge’s decision, it would appear this legal battle is behind both reality TV stars.