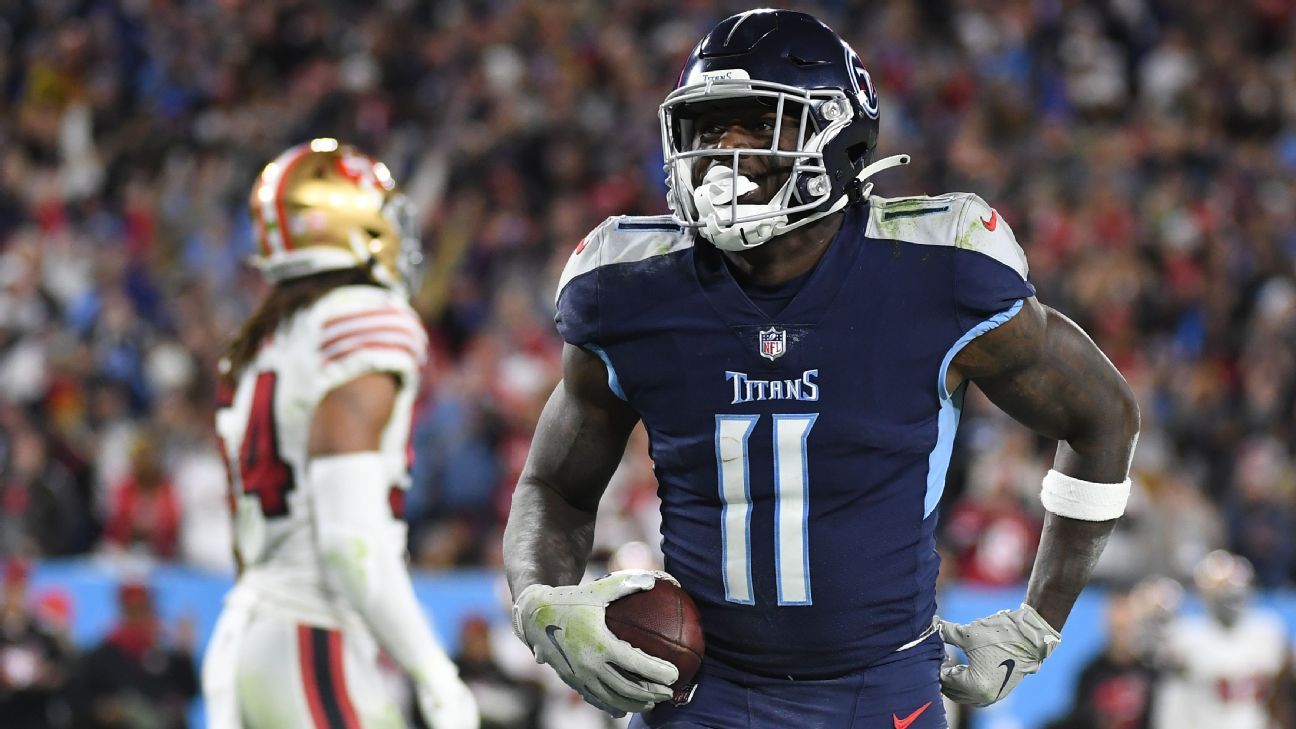 The Kansas City Chiefs were not willing to pay top dollar for Tyreek Hill, so they traded him to the Miami Dolphins, who promptly signed him to a four-year, $120 million extension in March and made him the highest-paid receiver in NFL history.

Then, the Buffalo Bills and All-Pro wide receiver Stefon Diggs agreed to a four-year, $104 million contract extension with $70 million guaranteed earlier this month.

As they say, “Yesterday’s price is not today’s price.”

That’s certainly the case for the Tennessee Titans and their dynamic playmaker A.J. Brown. The fourth-year receiver has two seasons of at least 1,000 receiving yards and has led the Titans in receptions, receiving yards, and receiving touchdowns in each of the past three seasons.

Brown has accumulated 24 touchdowns and averaged 16.2 yards per reception over that stretch, which ranks eighth and third, respectively, among all NFL pass-catchers.

Tennessee, which finished 12-5 last season, was 11-2 in games that Brown suited up. He has clearly established himself as one of the most integral parts of Tennessee’s offense.

Now he wants to be paid accordingly.

Not reporting for voluntary workouts caused a stir among Titans fans on social media, which sparked a response from Brown.

“I’m a diva and a bad teammate all of sudden, lol ok,” Brown said on Twitter on Monday.

Being absent for the start of voluntary workouts doesn’t bother Brown’s teammates, especially safety Kevin Byard, who was one of the team captains last year.

“These things all work themselves out,” Byard said Monday. “If you’re talking about A.J., A.J. is one of the best receivers in the league. Obviously, [coach Mike] Vrabel and [general manager] Jon [Robinson] have talked to him about being here, so I have no concerns about A.J. not coming in, being in shape, coming here ready to produce and being the same type of guy he’s always been.”

You deserve everything that God have in store for you! Never been a negative guy nor a bad teammate! https://t.co/5F0XwlvvrL

Brown isn’t the only member of the team who isn’t at St. Thomas Sports Park for the start of the offseason program.

Byard revealed Vrabel wasn’t at the facility Monday because he was dealing with something. When asked about developing chemistry with Ryan Tannehill, newly signed tight end Austin Hooper said he’s letting his quarterback spend time with his family away from the facility while he gets familiar with the order of operations in the Titans facility.

Not reporting for voluntary workouts isn’t a big deal. It’s not the first time in recent years that a Titans player didn’t report.

Left tackle Taylor Lewan didn’t take part in voluntary workouts and mandatory minicamp in 2018. It’s safe to say that situation worked itself out. Lewan reported to training camp that year and agreed to a five-year, $80 million contract.

It’s only a matter of time until Brown’s extension is done. The Titans have made it clear they want Brown to be in Nashville for years to come. They were in preliminary talks with Brown’s camp about a deal as early as the combine in early March before turning their attention to free agency.

“Right now, we are just trying to get through this free-agency period, seeing where we’ve landed cap-wise,” Robinson said on the team site. “A.J. is an important part of what we do. He’s a great teammate, he works hard, he’s about what we’re about. A.J. is a Titan, and we want to keep A.J. a Titan. And that’s part of our goal this offseason, or whenever that manifests itself, to come to an agreement to keep him around.”

Signing Brown to a deal as soon as possible would be a good thing for the Titans. Brown, McLaurin, Samuel, and Seattle Seahawks receiver D.K. Metcalf is among the best receivers from the 2019 draft class as they enter the final year of their rookie deals. Whichever player signs a deal first will set the floor for the others who sign afterward.

Brown, Metcalf, and Samuel are all represented by agent Tory Dandy. Dandy was active on the receiver market early in free agency. He negotiated a three-year deal worth $60 million, with $40 million guaranteed, for Tampa Bay Buccaneers wideout Chris Godwin and a three-year, $60 million contract extension for Los Angeles Chargers receiver Mike Williams.

Those deals seem like a bargain compared to the one Kirk signed a week later with the Jaguars. The market will continue to elevate, which is why the Titans need to act swiftly to get a deal done with Brown.