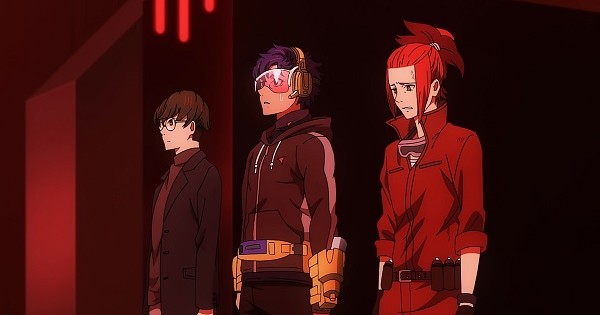 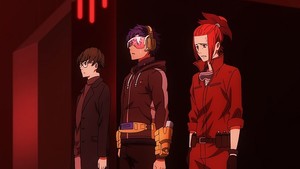 I definitely had my concerns going into the finale of Tokyo 24th Ward, not so much with whether it would achieve any measurable quality after all this time on the downtrend, but more on how much it would ask of me, evaluation-wise. I don’t think I’ve made any secret of how exhausting I’ve come to find this show as its weeks wore on, the series repeatedly detailing its views on a bifurcated political system and me having to regularly re-explain why I thought those articulations were stupid. So here at the end of this excruciating thought exercise, would the series throw out some complex domino-arrangement of a solution to its social struggles that I would then have to extend similar effort in knocking down? The answer turns out to be ‘no’, thankfully, though I suppose I probably never should have expected so much from this series in the first place.

It’s kind of a wonder to watch Tokyo 24th Ward sprint so quickly from its own ambitions at this point that you almost forget it ever had any. Perhaps that was the reason for such an order of operations. As the RGB boys close in on her, Asumi expresses shock, disbelief, that they could seek a third path, a compromise between the binary choices of the trolley problem they’d been presented with. That might ring as a properly true surprise had a teamwork-based fix-everything solution not been shown off for the very first problem she issued to them. Since then the one-or-the-other failures have come about as a result of more complicated plot factors as well as disagreements between the boys themselves, so it only makes sense that the show is able to articulate the possibility of things working out so long as conditions are perfect and people are able to work together. That all sets up for the show’s final lesson, by the way, and it really is all we get.

Instead, so much of the episode’s time is filled, perhaps appropriately for a big series finale, with spectacle of the more conventional variety. There’s a high-speed van race to get the kids to the system so they can have their chat with Asumi. There’s a ticking clock in the form of the intensifying protests that Mayor Gori can’t quell as 0th hangs outside his office and yells “Debate me, coward!”. Some of the vehicular CGI in all this action looks a bit skippy, and the character models (especially for faces or any crowd characters who aren’t protagonists) are as loose and unchecked as things have been since the beginning of this show. But there are still some fluid segments of stunt-based action, and as long as this show has basically stopped thinking about any of its concepts at this point, I’ll respect it for having the graciousness to instead occupy us by showing Shu using rocket-rollerblades to Rider Kick a big rig. Plus I just think it’s funny that after all the potential doomsaying about this show’s production melting down that was bandied about throughout its run (something I’m as guilty of as anyone else) it’s seemingly held together as well as possible here to the end, and it was the writing of this dang thing that ended up being the massive let-down. You never know, I guess.

But the trio does need to get to Asumi eventually, and while the VR cyberscape they occupy for their conversation looks as nice as any of the other nicer parts of this show, the actual content is almost shockingly thin conceptually. Say what you will about the execution of Tokyo 24th Ward‘s idea, at least it seemed to have ambition, and a smattering of socio-political vocabulary with which to express it. But as with the bleating beat-down the boys gave each other at the climax of last week’s episode, the writing has now decided to also cap off the climaxes of its plot in simpler, character-based terms rather than any grand, detailed reform suggestions. Most of what’s detailed here is the boys understanding the efforts that Asumi suffered through as proxy for the choices that should be made by humans, and thus resolving to…allow humans to make those choices. Yes, the big compromising solution at the heart of “KANAE System 2.0” turns out to be…voting! Regular old democratic voting. They don’t even spend any time talking about what kind of systemic overhaul this represents for the people of the 24th Ward, instead resolving with some light platitudes about making sure people choose what’s best, then waving goodbye to Asumi’s ghost-in-the-machine as they confirm how she was basically the most awesome person ever and they all loved her. Seriously, that’s the big triumphant moment of this climax, as all the people around the Ward watching the livestream of RGB hashing things out with the Minority Report Vtuber unilaterally declare how much they love her, and that love is the unifying factor that makes them all abandon those hasty violent reform options in favor of going back to good old voting. Or something.

And that’s it! All the wrap-ups that follow are embarrassingly basic, from the show flashing forward to the real-world date it ended on of April 6th, 2022, because that’s how clever it thinks it is, to Shantytown getting torn down anyway, but it’s okay because in this case it was because of seismic resistance issues. After all its build-up and Big Questions presented by the recurring trolley problem format, the series seems uninterested in provoking answers even from the audience, settling on “Things aren’t perfect, but they’ll probably be ok if you just let people figure it out”. It’s bizarrely flippant and optimistic for a story that clearly had some understanding of the complex societal factors that led to so many of the ills it was illustrating in the first place. But then, as I said, I almost respect the show more for realizing right at the finish line that it had neither the concept nor ability to waste our time with more complicated, ill-fated illustrative solutions. So that’s where it lands: A show that weeks ago was able to make the salient point that crime rates in lower-income areas are an inflated result of various baked-in socioeconomic prejudices, now declares all societal issues solved when we see Shu head-butt a mugger and hand a kid some bread. I guess the only thing that stops a bad guy with a knife is a good guy with a bun.

Tokyo 24th Ward is currently streaming on
Crunchyroll and Funimation.


Chris is a freelance writer who appreciates anime, action figures, and additional ancillary artistry. He can be found staying up way too late posting screencaps on his Twitter.