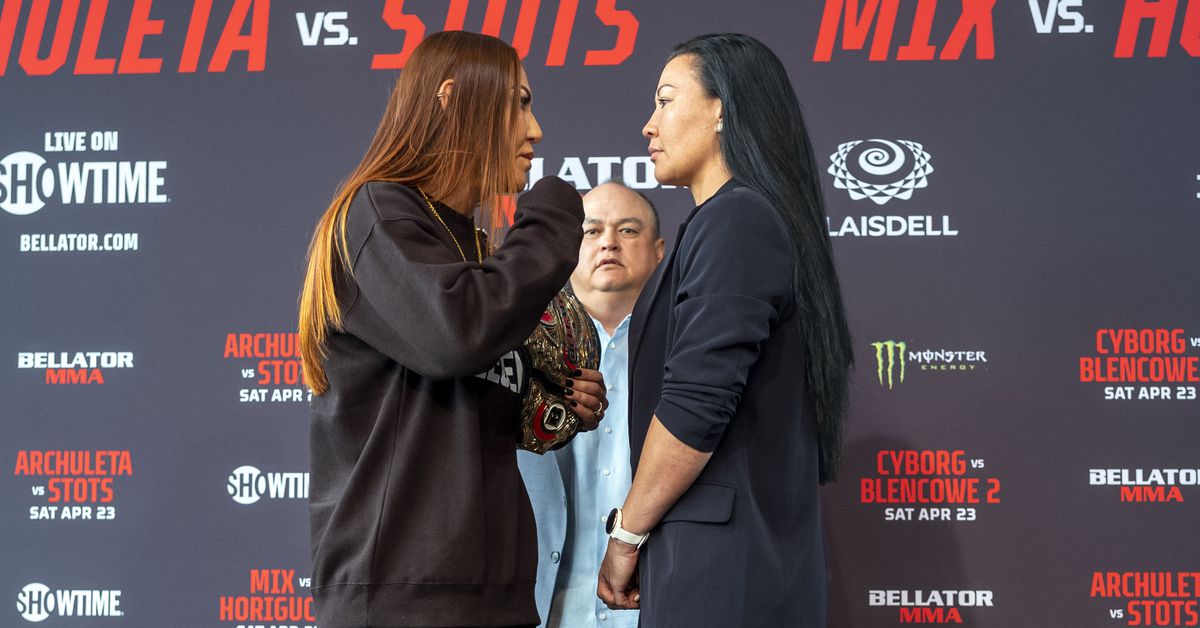 This weekend we have a ton of MMA action on the docket with Bellator offering a Friday and Saturday doubleheader featuring three title fights, two bantamweight grand prix bouts, two grand prix qualifier bouts and a host of other action. Also on Saturday, the UFC continues its current streak of events with UFC Vegas 52. There are a lot of fights, so let’s get to it and look at some of the best bets available on the card.

All odds are courtesy of our friends at DraftKings Sportsbook.

In the main event of Bellator 278, Carmouche will challenge Juliana Velasquez for the flyweight title, and she has a great chance to finally win a championship belt. Velasquez is a former judoka with an undefeated record, but she remains a bit underwhelming. Velasquez’s ability to grapple and strike has carried her through her career thus far, but Carmouche is equally as well-rounded and a much more assertive fighter. Simply put, I think Carmouche is as good or better than Velasquez in all phases and should take this one home.

Meanwhile at Bellator 279, former UFC lightweight Yancy Medeiros takes on two-time Bellator featherweight title challenger Emmanuel Sanchez in a lightweight contest. Both men are riding sizable losing streaks but each has been losing to top competition. The difference is Medeiros is the naturally larger man and will be getting a major boost from fighting in Hawaii. Given that, I love the underdog value here.

Over at UFC Vegas 52, in the co-main event Puelles looks to keep his current winning streak alive when he faces Clay Guida in the co-main event. Guida is 40 years old and at this point he’s getting by on his guile and cardio, but Puelles is bigger, younger, faster, and pretty well-rounded. Fade the old veteran in favor of the young prospect.

Andrade is a force of nature whose career losses have all either been at bantamweight or against current or former champions. Andrade is currently the second-best flyweight in the world, behind only the top pound-for-pound woman in the sport, and returning to the strawweight division is only going to make her that much more dangerous. Lemos is a fine fighter, but with five rounds to work, Andrade should finish her.

This is going to be an action-packed striking affair, but both men are durable and should make it to the final bell if history is any indicator. Of the combined 18 UFC fights between Vannata and Jourdain, only 6 of them have ended in a finish. At that rate, this line should be -200, so you’re getting value.

Similar to the above, four of Vannata and Jourdain’s combined 18 UFC fights have ended in split decisions. That’s 22 percent, which implies a line of +350. Granted, split decisions are hard to predict, but there still appears to be some value here given the history of both men.

Also on the main card of UFC Vegas 52, De La Rosa takes on fellow prospect Maycee Barber. Barber is the more well-known of the two, given her propensity to espouse her own greatness, but De La Rosa might be the better fighter. Both have their limitations but De La Rosa is the better grappler, and if she can get one or two takedowns, that could be enough to get the job done.

Parlay of the Week

We already saw this fight 18 months ago and it went exactly as everyone thought it would. The only interesting wrinkle was that Cyborg won by submission instead of her usual KO. There is absolutely no reason for anyone to think things will go differently this time, and the fact that Cyborg isn’t the biggest favorite on the weekend is categorically insane.

Stots is a multiple time D-II national champion wrestler and Archuleta has proven to have difficulties with fighters who can consistently control where the action takes place. Furthermore, Archuleta’s most recent fight was a loss to Stots’ friend and teammate Sergio Pettis, meaning Stots should be well-prepared for what the one-time bantamweight champion brings to the cage.

Horiguchi has had an up-and-down run recently, but Mix should provide him a good opportunity to get back on track. Mix is a powerful wrestler and will be the bigger man, but Horiguchi is simply better everywhere. Add in that this is five rounds and Mix has had issues sustaining his pace into the later rounds and Horiguchi should get his hand raised, one way or the other.

Parlay these three bets together for +123 odds.

Long Shot of the Week

You want a long shot? Well, it doesn’t get much longer than this. The two biggest underdogs on the UFC card parlayed together will pay out a tidy 71-to-1. And I honestly believe that line has value. Alexander Romanov is an undefeated prospect, but he does rely heavily on his grappling, and for Sherman’s many flaws, he doesn’t give up too many takedowns. And Mike Jackson is — well, he’s Mike Jackson, but Dean Barry isn’t some world-beater. There is no sane world where he should be a -1125 favorite. I think both underdogs have a little bit of value to them and the implied probability for this parlay hitting is 1.4 percent. If they held this event 100 times, it feels like the two upsets happen more than once. Let’s find out.

After taking a week off, we’re back and looking to rebound from a painful UFC 273. Aljamain Sterling really killed us (and everyone else), but fortunately we have a lot of opportunity to get back on track this weekend.

All information in this article is provided to readers of MMA Fighting for entertainment, news, and amusement purposes only. It is the responsibility of the reader to learn and abide by online gambling laws in their region before placing any online sports betting wagers.