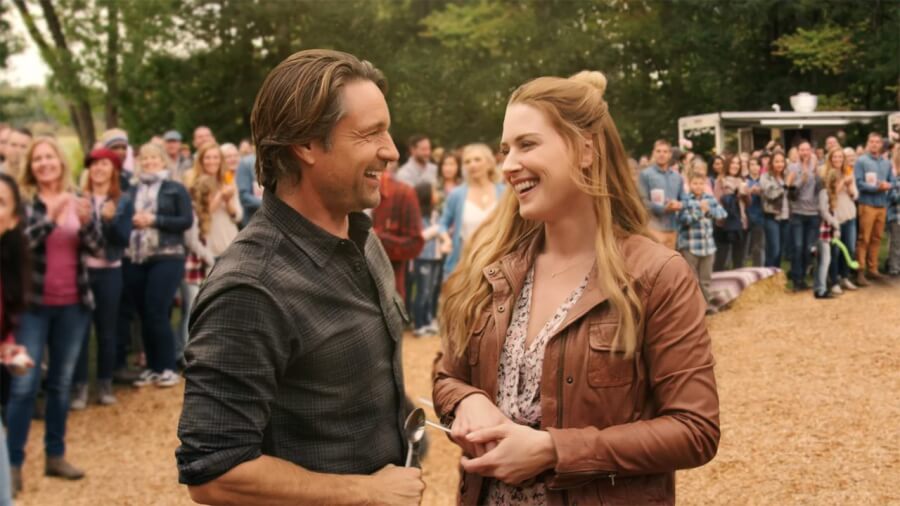 Editor’s note: This preview was first published in July 2021 but has been updated monthly to reflect new developments with the most recent update being in April 2022.

Quick recap before we dive into the future of the series. Virgin River is a drama series adapting the Robyn Carr series of novels. It focuses on Mel, a young midwife and nurse practitioner who moves out of the big city to a small rustic town in Northern California.

Throughout the show’s three seasons we’ve seen Mel introduced to a myriad of different people throughout the town laying down her roots. Of course, not everything has gone swimmingly with plenty of drama throughout.

Season 1 of Virgin River was first released on Netflix all the way back in December 2019 with subsequent releases in November 2020 and most recently released season 3 in July 2021.

On September 20th, Netflix confirmed to USAToday that season 4 was going ahead and not only that, the show would return for a season 5 at Netflix too. Multi-season orders are rare at Netflix but is a testament to the series’ popularity.

ICYMI: Virgin River has been renewed for a fourth and fifth season! pic.twitter.com/asZhZDT6O4

Of course, we’ve been reporting about season 4 of Virgin River existing long before the official renewal came. For the past several seasons, we’ve often heard that filming dates were scheduled before any renewal and that was once again the case for season 4.

Reacting to the news of a dual season renewal, Martin Henderson said:

“Yep. This is happening. Such a relief to finally share this news with all of you who’ve been patiently waiting. Virgin River Season 4 and 5 are in the works thanks to all of you passionate fans….thank you!! so much more drama to come…”

“So excited to share with you that our little show has been picked up for two seasons!!!! Thank you all for being the best fans ever!!!!!”

Best of all, Colin announced that season 4 would be even longer than previous seasons. The episode count for season 4 of Virgin River has been expanded to 12 episodes from 10.

Earlier in 2021, we reported that several production listings listed the show to be coming back for a fourth season. Better yet, we later got word that filming on season 4 was due to begin at the end of July 2021.

Thanks to a post from Watershed Grill on Instagram, we also knew that filming was taking place there between August 17th and 18th, 2021 (and multiple times afterward).

The Watershed Grill serves as the filming location for Jack’s bar in Virgin River.

Filming was expected to conclude on November 30th, 2021, and thanks to posts via the Instagram page they’ve confirmed that the show has wrapped.

Much of the cast and crew received goody-bags following the conclusion of filming.

In February 2022, according to an Instagram Story (h/t HelloMagazine) Alexandra Breckenridge posted that another key part of the production process had just finished telling followers:

“I just went and finished my last ADR, for Virgin River, for those of you who dont know ADR is, I think it stands for audio digital recording,”

This process is also sometimes known as “soundpost” which means that Breckenridge likely went into an audio booth to record additional lines or even re-record some of the lines from the show in a quieter setting.

Following “soundpost”, we usually see shows arrive on Netflix within months indicating a release is just around the corner.

Now we know that filming for season 5 is scheduled to start in July 2022, we’re currently predicting that season 4 of Virgin River will be on Netflix sometime between May and August 2022.

How well did Virgin River season 3 do on Netflix?

A swift renewal shouldn’t come as a huge surprise for followers of the show. Both seasons 2 and 3 before were renewed ahead of their season debuts on Netflix. This was especially the case for season 3 which was filmed during the release of season 2.

Thanks to new top 10 figures, we can see exactly why Netflix opted to give the show a two-season order.

According to newly released viewing hour figures, between July 4th, 2021 to August 15th, the show pulled in over a quarter of a billion hours viewed on the platform. Between the above period, it was watched 255,120,000 hours on Netflix.

The show has featured in the US top 10s for 75 days in total. For season 3, the show was #1 in the United States for just over two weeks and eventually dropped out of the top 10s over a month later.

Nielsen’s top 10s also ranked the series the number 1 watched series between July 12th and July 18th with 2,109 million minutes watched during that week beating out Manifest (on Netflix) and Loki (on Disney+).

In late October 2021, Netflix announced two new characters that would feature in season 4 of Virgin River.

Mark Ghanimé, known for his stint on Helix, will play Dr. Cameron Hayek. He’s Virgin River’s brand new physician who is “armed with eye-catching good looks, a razor-sharp intellect, and a smile that could light up the world, Cameron makes an immediate splash in town – especially with the ladies of Virgin River.”

Also, starring is Kai Bradbury who will play Denny Cutler who is Doc’s long-lost grandson. Denny comes bearing a secret despite best intentions to rekindle a relationship with his grandfather.

One of the extras we’ll see in season 4 includes Rohain Arora who will play a waiter.

When will season 4 of Virgin River be on Netflix?

With filming taking place so early, the means that we shouldn’t have to wait a ridiculous length of time for the new season.

Instead, we’re currently predicting that Virgin River season 4 should return in 2022 with it most likely being in Q2-Q3 2022 (anywhere between April and July 2022).

What to expect from Virgin River season 4

Mel’s big story going into season 4 is that she’s pregnant although the actual father has yet to be revealed. That’s believed to be revealed by the end of season 4.

Brady’s future looks to be in jeopardy given that he’s been arrested for the shooting of Jack at the end of season 2.

We will absolutely be seeing the return of Hope in season 4 after her notable absence in season 3. The reason why she was absent for season 3 was due to not being allowed to travel to film but in the show it was explained that she was visiting her aunt in another state. On the way back, however, she had been hospitalized after an accident in the storm when returning to Virgin River.

Crossing to Doc Mullins (husband of Hope), he’ll continue to battle his disease (macular degeneration) which has been slowly progressing throughout season 3. Sue Tenney, who serves as the showrunner for Virgin River, spoke to Entertainment Weekly about what we can expect from Hope in season 4 saying:

“To us, it’s the recovery and what she’s dealing with – a traumatic brain injury. In a hospital and going through recovery, that’s not really where our show lives.

But we’re very committed to what the truth of something is, so we’ll go to the edge of what’s the best recovery for this.

We always stick with the parameters, medically, but also we know at this point what we like to do, which are complicated emotionally drama-based stories.”

It’s been confirmed that Lynda Boyd will return for season 4 in the form of flashbacks according to an interview with the actress.

Daniel Gillies has teased a return to the show too saying:

“Here’s what I’ll say, somewhat enigmatically, the good news about being the dead husband is that you can appear at any time. I’ll leave it at that.”

On the show’s Instagram account, they rarely give too many hints about what we can expect but did recently ask for suggestions for Jack’s specials board that sits outside the restaurant.

Will there be a season 5 & 6 of Virgin River on Netflix?

As we mentioned there will absolutely be a season 5 of Virgin River. Details are slim right now with the script likely still being put together.

In an Instagram live, Alexandra Breckenridge revealed that filming was originally scheduled to begin in March 2022 but has subsequently been pushed back.

“We were supposed to start in March but it’s been pushed so I don’t know,” the actress said, adding “I’m hoping that maybe we’ll start in the summer. It would be nice to film in Vancouver in the summer rather than in the winter because to be quite frank with you guys, I’m pretty done filming in the winter.”

As for season 6, it’s really too early to tell. It’ll all be down to performance on Netflix.

Speaking before the announcement to Us Weekly, the showrunner Sue Tenney teased that they “want to do as many seasons as we can”. There’s a mountain of source material to cover in future seasons so the door is wide open.

If you’re looking for something else to stream in the meantime, head on over to our top recommendations on shows similar to Virgin River.

As for keeping up-to-date with Virgin River announcements, either follow us or follow the official Instagram page for Virgin River which has been a great exclusive source of behind-the-scenes snaps and more.

You’ll find videos and photos like the recently uploaded video on set celebrating the birthday of Martin Henderson.

Are you looking forward to season 4 of Virgin River on Netflix? Let us know in the comments down below.