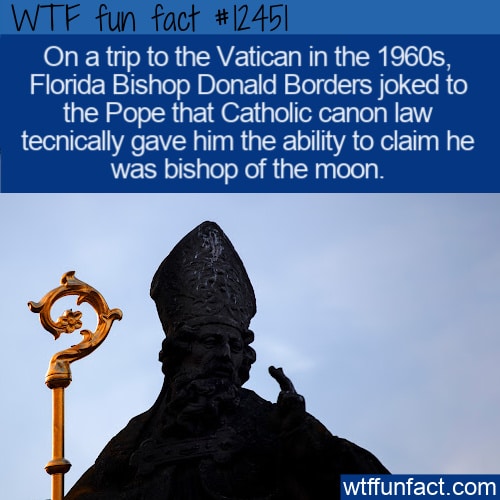 Archbishop William D. Borders was the founding bishop of the Diocese of Orlando, established in 1968. It covered 13 counties and nearly 10,000 square miles of central Florida. And possibly the moon.

Now, the Catholic Church has made no claim at all to the moon, but Borders’ territory happened to include Brevard, Florida, home to Cape Canaveral and the Kennedy Space Center. If that sounds familiar, it’s because that is where the U.S. launches its space missions.

At the time of the moon landing in July of 1969, many religious leaders praised the space program, seeing it as proof that God’s creation was neverending.

But for Borders, the moon landing was a little more personal. According to the 1917 Code of Canon Law (aka The Pio-Benedictine Code), which was in effect until 1983, any newly discovered territory was to be placed under the jurisdiction of the diocese from which the expedition that discovered that territory originated.

In other words, since the Apollo 11 mission launched from Cape Canaveral and that was in Borders’ territory, it was technically under his jurisdiction. A couple of other bishops joked that they might have dibs, but it was all in good fun.

In fact, to keep the joke going, Bishop Borders mentioned this to Pope Paul VI on a visit to the Vatican in late 1969. The pope had watched the moon landing with great interest (the Vatican has one of the best observatories in the world), but we’re not quite sure what he thought of the claim.

The story of their meeting comes to us via Renae Bennett, Orlando’s diocesan archivist, who wrote:

“During his visit, Bishop Borders mentioned to the pope that he was the ‘bishop of the moon.’ Responding to the pontiff’s perplexed reaction, Bishop Borders explained that according to the 1917 Code of Canon Law (in effect at that time), any newly discovered territory was placed under the jurisdiction of the diocese from which the expedition that discovered that territory originated. Since Cape Canaveral, launching site for the Apollo moon missions, was in Brevard County and part of the Diocese of Orlando, then in addition to being bishop of 13 counties, he was also bishop of the moon,” Bennett wrote. That would add more than 14.6 million square miles to the Diocese of Orlando, making that diocese the largest in the known universe.”

Of course, it all means very little, but that’s what makes it a fun fact.

Another fun fact: This would all make the current Bishop of Orlando, John G. Noonan, not only bishop of the moon but also of the International Space Station, which launched from Kennedy Space Center. – WTF fun facts

Source: “A Catholic bishop of the moon?” — The Catholic Weekly