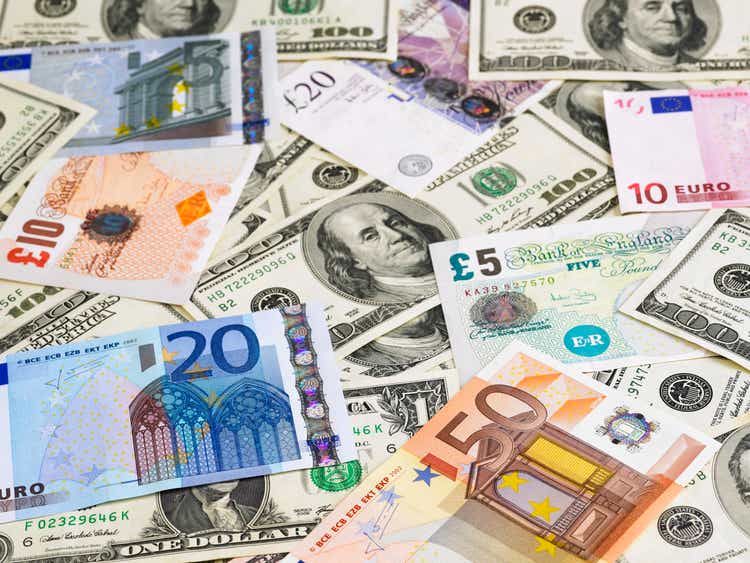 Overview: Benchmark 10-year bonds yields in the US and Europe are at new highs for the year. The US yield is approaching 2.90%, while European rates are mostly 5-8 bp higher. The 10-year UK Gilt yield is up nine basis points to push near 1.98%. The higher yields are seeing the yen’s losing streak extend, and the greenback has jumped 1% to around JPY128.45 The dollar is trading lower against the other major currencies but the Swiss franc. The dollar-bloc currencies and Scandis lead the move. Emerging market currencies are mixed. Of note, central European currencies are mostly higher (the Polish zloty is the chief exception) and Asia Pacific currencies and the South African rand are softer. Most of the large Asia Pacific equity markets, but China and Hong Kong rose. Europe’s Stoxx 600 is off around 1.4%, giving back nearly twice the gains recorded in the last two sessions. US futures have reversed their earlier gains. Gold was turned back from $2000 yesterday and is consolidating around $1975. June WTI is also consolidating (~$105-$108). US natgas is snapping a five-day advance, while Europe’s benchmark is up around 6.5% after falling 8.4% yesterday. Iron ore is off 2.6% to extend yesterday’s 2.2% fall. Copper is lower for the first time in five sessions. July wheat has come back offered after rising five times in the past six.

The yen is falling for the 13th session today and has a six-week losing streak coming into this week. Most recognize that the driving force is the divergence of monetary policy and interest rates. Indeed, the trend follower and momentum traders, as captured in the non-commercial (speculative) futures traders have their largest net short yen position in four years (Commitment of Traders report through April 12). Some, like the historian Adam Tooze, wonder if the yen’s weakness will reduce Japan’s demand for Treasuries. The dollar has been rising for some time. Leaving aside the panic in 2020 as the pandemic broke, the dollar bottomed against the yen on January 5, 2021, and bottomed against the euro the following day.

The US Treasury’s portfolio flow report (TIC), released before the weekend shows Japanese investors were net purchasers of US Treasuries for the past three years, boosting their holdings by about $264 bln. There were net sellers in the previous four years (2015-2018) of a little more than $190 bln. The data that was released last week showed that Japanese holdings increased by $3.2 bln in February to $1.306 trillion, which is near the record highs set last year. Yet, while they apparently were buying Treasuries in February, according to Japan’s Ministry of Finance weekly data, Japanese investors sold around JPY2.3 trillion (~$19 bln) of foreign bonds. Note that Japanese life insurers, with around $3 trillion of assets are expected to announce this fiscal year’s investment strategy later this month. US Treasuries are an important way that the weakness of the yen can be avoided.

What about other investors? Amid a historic sell-off in bonds, foreign investors have bought a record amount of US securities over the six months through February (average $126 bln a month), according to the TIC data. Finally, consider that the Federal Reserve acts as a custodian for foreign central banks. The Treasury and Agency holdings in custody ended last year around $3.41 trillion. As of April 13, they stood near $3.46 trillion, a $50 bln increase in 3 1/2 months, during which time the US 10-year yield rose by about 130 bp and the 2-year yield rose slightly more than 170 bp. Yes, someone has been selling US bonds, but it does not look like it was Japan or central banks. Foreign investors have been significant buyers of US assets through February.

Japanese Finance Minister Suzuki’s rhetoric stepped up a little. He warned about the “rapidly weakening” yen and noted that its weakness generated “strong demerits” for the economy. Ahead of his trip to the G7 and G20 meetings, he confirmed being in contact with the US. The market is unpersuaded. The dollar is making new highs in Europe near JPY128.45. The 13th session advance means that the dollar has not fallen once this month against the yen. Today is the first session since late March, though, that the dollar is above its upper Bollinger Band (two standard deviations above the 20-day moving average). It is found near JPY127.90 today. The JPY130 level remains the next big target. The Australian dollar held yesterday’s low slightly above $0.7340 and returned to $0.7400. It needs to move above yesterday’s highs (~$0.7415) to boost confidence a low is in place. The Aussie has fallen in the last four sessions, and eight of the past nine. The US dollar is trading around CNY6.38, the upper end of its range going back to last December. The PBOC announced nearly two dozen measures aimed at households and small businesses to ease some economic pressures, mostly encouraging lending that may be worth around CNY1 trillion (~$155 bln). Note too that the PBOC’s transfer of CNY600 bln profits to the government (used for tax rebates and transfers to local governments) may be the rough equivalent of another 25 bp cut in reserve requirements. Although Chinese officials have been restrained on the exchange rate, we suspect pressure is building for a weaker yuan. That said, for the second consecutive session, the PBOC set the dollar’s reference rate slightly lower than expected (CNY6.3720 vs. CNY6.3730).

Russia’s offensive in Donbas appears to have begun in earnest. This may signal a new phase in the war. Europe seems to be moving toward embargoing Russian oil. It may first move to ban oil via Russian ships on the Baltic and the Black Sea. It may be phased in over a few months. This will not satisfy some of the critics and will take some time it to bite. However, Russia is thought to have little storage capacity and already reports suggest refining capacity is limited.

UK Prime Minister Johnson is expected to offer an apology to Parliament later today. It will be his first appearance in Parliament since the London police fined him (and Chancellor Sunak) for his birthday party during Covid restrictions in 2020. The war in Ukraine seemed to off the PM a new lifeline as he appeared to have been facing a backbench rebellion before the invasion. The parliament session could be brutal, and the opposition is pushing for a formal censure and parliamentary investigation. The key to Johnson’s political future may be the local elections on May 5, the same day the BOE meets. The swaps market has about a 33% chance that the central bank hikes by 50 bp.

The euro tested the $1.0760 area, holding a couple hundredth of a cent above last week’s two-year low. Although the single currency has frayed support at $1.08, it did not close below it until yesterday. It has managed to resurface it to reach almost $1.0815 in early European trading, where it met fresh sellers. There is a 1.2 bln euro option struck at $1.08 that expires today. The euro has fallen for the past three sessions. Meanwhile, the latest polls for this weekend’s run-off election in France show a widening lead for Macron. An average of polls (calculated by Bloomberg) shows a little more than an eight-percentage point gap after Macon had an almost 5 percentage point lead in the first round. Sterling dipped below $1.30, but also held last week’s low (~$1.2975) and is trying to snap a three-day drop. Like the euro, the sterling’s session highs were recorded in early European turnover. It reached $1.3040, which may be the peak. Yesterday’s high was closer to $1.3065. There are a set of options for GBP470 mln at $1.30 that expire today.

St. Louis Fed President Bullard is using his version of the Taylor Rule to press his hawkish arguments. The Taylor Rule relates inflation and GDP relative to neutrality to a certain target for the overnight rate. Bullard, the leading hawk, argues that the Fed funds target ought to be around 3.5% by the end of the year. Even if the Fed were to hike by 50 bp at each of the remaining six meetings the effective rate will be just below there. He said yesterday that while it is not his base case, a 75 bp hike may be needed at some point. The December Fed funds futures imply a 2.50% yield at year-end. The swaps market seen the Fed funds peaking at around 3% next year.

The surge in US interest rates warns that the interest-rate sectors should be among the first to feel the sting. Many see the housing market as a likely candidate. March housing starts and permits will be reported today. A 1.6% decline in starts, the median forecast in Bloomberg’s survey would be the second in three months, and put starts lower on the year. Still, around 1.74 mln, starts will remain at historically high levels. The same is generally true of permits. A decline in March permits would be the second consecutive decline but anything above 1.8 mln must be considered strong. More pressure is likely to be seen tomorrow with the weekly mortgage applications, which likely fell for the sixth consecutive week (through April 15), and existing home sales. Existing home sales are expected to have fallen for the third month in the past four. They may have slipped below a 6 mln unit annual pace for the first time since last August. Lastly, Chicago Fed President Evans speaks at the Economic Club of New York at lunch today. He is often perceived to be a dove, but even the doves at the Fed seem open to a 50 bp hike next month. Evans does not have a vote on the FOMC this year.

Canada reports March housing starts and existing home sales today. Both are expected to have held up better than in the US. However, there is scope for disappointment. After declining by slightly more than a quarter in December-January, Canadian housing starts rose by almost 8% in February. Existing home sales have risen since last September, which followed a five-month slide. Canada also reports its February portfolio flows. These are not the economic data points that typically move the foreign exchange market. Tomorrow’s March CPI report is a different matter. Price pressures are accelerating, and the market has a 90% of a 50 bp hike discounted for the next central bank meeting on June 1.

The Canadian dollar is consolidating. The greenback remains within last Thursday’s range (~CAD1.2520-CAD1.2640). It is in the 20-30-tick range on either side of CAD1.2600 today. There is a $625 mln option at CAD1.2625 that expires today. The Canadian dollar has weakened for the past three sessions and five of the past six. It seems the best directional cues are still coming from equities. Mexico’s economic calendar is light today and the US dollar is finding support this month in the MXN19.72-MXN19.75 area. The greenback posted an outside down day yesterday (trading on both sides of last Friday’s range and settling below its low. Follow-through selling today took it to MXN19.7625 before bouncing back. It toyed with the MXN20.00 level last week but failed to close above it.

Editor’s Note: The summary bullets for this article were chosen by Seeking Alpha editors.